I was a little late to the gathering (I must have missed the memo) since I was happily knitting and watching The Anatomy of Knitting video/podcast on my iPad till Z. showed up and asked me if I wanted to see satellites. Heck Ya.

Whoa, it was dark as I made my way out to the Vista. The Man had turned off the motion-sensored lights and it took several minutes for my eyes to adjust to the darkness.

Again, we spotted shooting stars, satellites, several flares - some quite bright, qualitatively measured by our "wow-WOW!" scale. (We saw a single WOW! flare.) This time around we could easily make out the Milky Way and with binoculars we could see individual star clusters. The Boy commented how we were lucky to see all of this for free. (Wryly, The Man spoke my thoughts: Well, we did have to buy this wonderful place . . . .)

When it was way past our bedtime The Man and I creakily got up from laying on the ground. The dogs headed towards the garage but The Boy commented how great it would be to sleep under the stars. His lucky day night, The Man agreed.

The dogs and I headed off to our soft beds as the guys settled into their sleeping bags in the middle of the driveway.

This morning the dogs and I walked out to the Vista to find The Man sipping his coffee. He said he had been up since dawn. Too early for the dogs it seems since they opted to sleep in rather than follow him back outdoors. 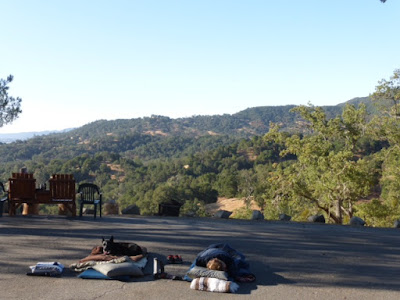 The Boy went back to sleep after receiving sloppy wake-up kisses from Mele. 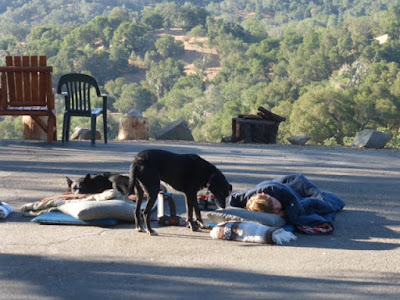 During the wee hours the guys were awakened by the coyotes yipping and yapping for a long time. I'm pretty sure I know what the excited coyote chatter was about. The critters were probably commenting about the tasty morsels - the pigs in a blanket - up on the hill. Yum.