A spooky story just in time for Halloween.

Fall was coming, the weather was changing, and the animals were getting ready by shedding their summer coat for thicker winter coats.

It started innocent enough, a fluff of feather here, a fluffy feather there. Then more and more till it looked like a pillow fight. Every day, every night, everywhere. A severe case of alopecia, the older hens were looking bald and bare. They also stopped laying eggs.

This was our first hard molt and quite unexpected. Since feathers are mostly protein, I increased the protein in the Girls' diet: BOSS --black oil sunflower seeds-- and soybeans ("No, Honey, the boiled soybeans are for the chickens, not for us."). I also watched them carefully, if they pecked at one another I was prepared to protect and isolate the injured bird at the first sign of blood. Chickens can be cruel like that.

Then it happened, the new immature feathers appeared. They're called pin feathers. They look like porcupine quills. Or, bones. Yes, bones. My chickens looked like walking skeletons. Little nightmares.


Now that a few weeks have passed since the molt began, the Girls' feathers are coming in nicely. Thankfully, we haven't had to deal with any bleeding or broken pin feathers or a pecked on, picked on, chicken.


They won't start laying eggs again till the molt is completely over. Possibly not till next Spring. Now, that's scary.

Email ThisBlogThis!Share to TwitterShare to FacebookShare to Pinterest
Labels: TheGirls 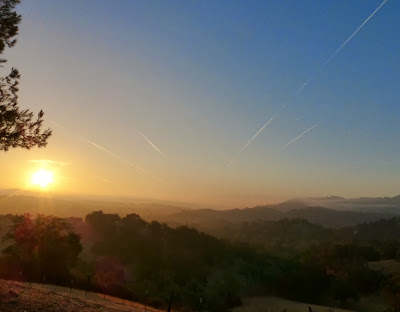 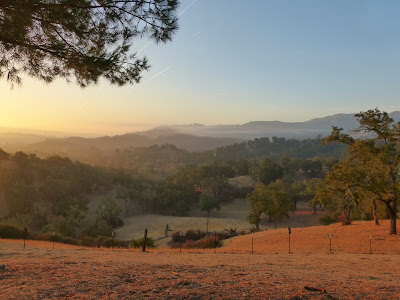 Last August, at the Atascadero Lake Car Show The Man noticed a 1970 Mustang. It was notable because of the Honolulu Midweek Newspaper article explaining the car's Hawaiian heritage. When The Man got home he mentioned the car. It didn't take long to find the Midweek article online and that led me to ex-Oahu local Sandee and her blog: Sweet Home Atascadero.

We agreed to meet at the local Starbucks and then chatted non-stop for a couple of hours fueled by commonalities and caffeine. The topics ranged anywhere from finding a good hairstylist (still looking), best grocery stores, and finding medical care. It's a challenge starting over and we could compare notes and commiserate. This is Sandee's first experience to live on the mainland, it's all an adventure for her.

We didn't even begin to chat about the local kine foods we miss the most or what we've been able to find in SLO. (My tip: Aloha shoyu found at San Luis Oriental Market, 1255 Monterey St.)

Yesterday, I received my third box of charity yarn from Leslye Borden and her organization Handmade Especially For You.  The box contained colorful magic yarn balls to make eight Comfort Scarves.  I thought the recycled box looked familiar so I peeled back the shipping label to reveal the return address.  It wasn't my box but imagine my surprise to discover that I knew the name on the box.  I asked The Man if it was the Kathy that we knew and he said, "Yup".

The Man's Mom and Kathy are friends.  They both belong to The Red Hat Society and formed their own chapter Valley Isle Vixens on Maui.  Together they travel the world and have a great time.  And once again they'll both be here in March before they attend their Monterey Convention.  We're looking forward to their visit; they're fun to be around.  (Note to self: remember to ask the ladies to bring their bambucha knitting needles so we can do a little charity scarfing together.)

The Man suggested maybe it's just the three of us making scarves.  Hehe, I don't think so unless Kathy and his Mom have made 1092 scarves (to add to the eight I sent in).  In September, 1100 scarves were shipped to over fifty Women's shelters in California.

Leslye replied, "Tell your husband we have many, many volunteers, not just you and your family and friends, although you all do a lot for Handmade.  Thanks for everything."

A happy coincidence.  And, yes, it is a small world after all.  A small giving world. 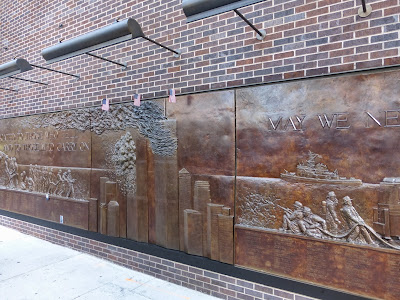 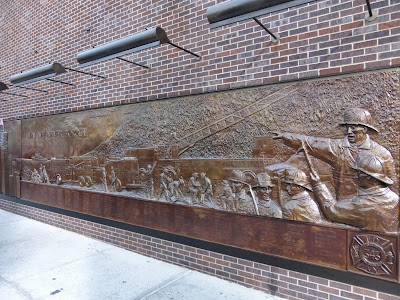 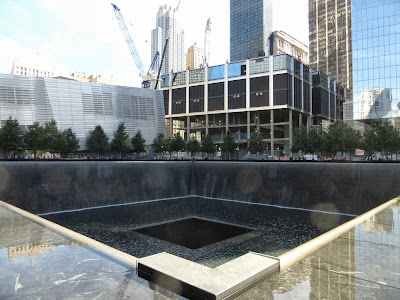 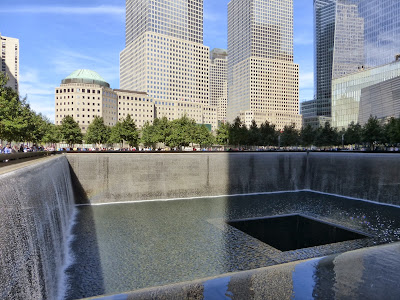 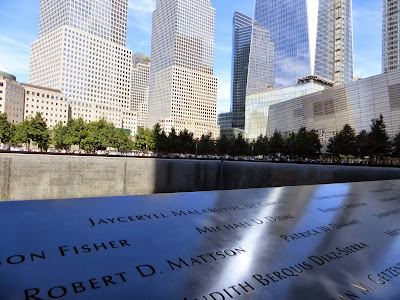 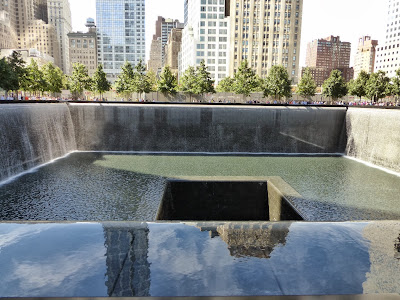 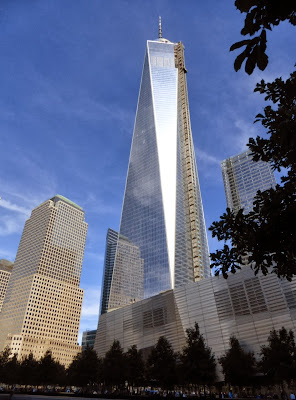 
What I learned from our trip to Manhattan: 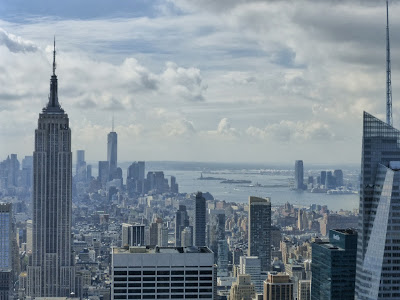 What The Man learned:

Don't leave me alone never, ever.  The second day we wanted to explore Midtown Manhattan. We got an early start and it was still dark when we caught the ferry from Belford, NJ.  The Man went upstairs to sit outside on the outer deck.  I stayed in the main cabin.  When my seat mates got up to disembark so did I.

I first noticed the dock looked familiar, then I noticed that I was alone as I watched the Ferry motor away.  At that moment, The Man texted "Plenty of seats upstairs".

At that point I wondered, "why are we texting"?  I am alone in New York City and it's dark.  I gave The Man a call.  He was going to get off at the next stop.

I had mistakenly thought it was an Express ferry to Midtown, get on, get off.  Simple.  I was wrong and had gotten off prematurely at the same dock from the day before in the Financial District, Lower Manhattan.  Since we had covered alot of the area the day before including the waterfront we both knew where we were and which direction to walk.

We met at Battery Park.  From there we caught the subway to Times Square. 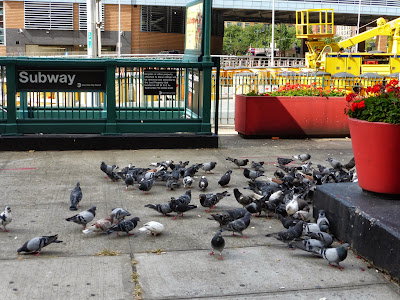 Out and About the New Jersey Shore 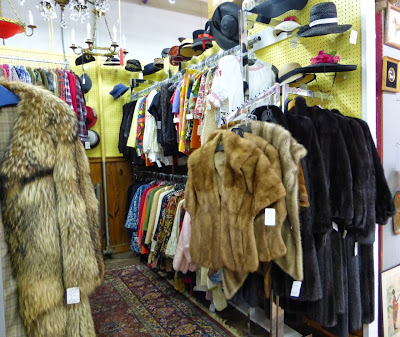 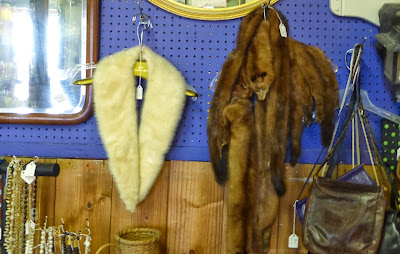 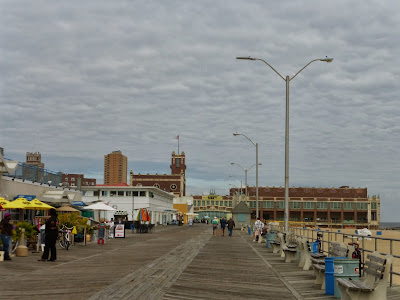 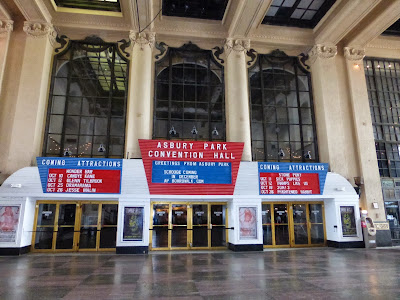 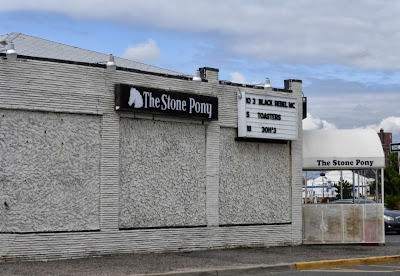 Summer is over, the beaches are empty, and even the Swan boats are leaving town. 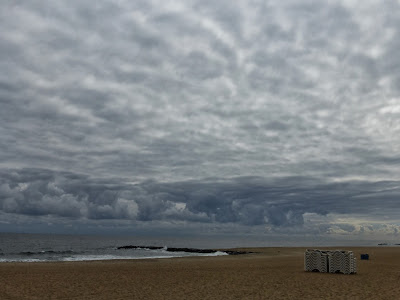