Yesterday I attended a presentation by SLO's Master Food Preservers. The MFP program is sponsored by the University of California Cooperative Extension (UCCE) as part of a public service and outreach program to provide home food safety and home preservation information. The two-hour class was called "All About Citrus".

Freezer Lemon Curd was demonstrated by Arlene, MFP. We sampled her yummy dessert with bits of vanilla wafer cookies, aka crust, and mascarpone cheese. Oh, fancy. I wasn't familiar with mascarpone cheese. The woman next to me said it was an Italian cream cheese. "You can get it at Trader Joe's." Psst, you can also get a jar of lemon curd at TJ. 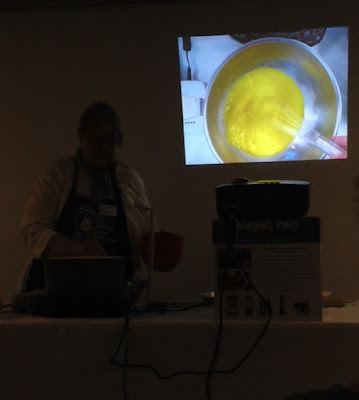 Carla's demonstration was on Salt Cured Lemons. (I'm not sure if there was any to taste or I just missed it.)

After the citrus presentations there was time for any questions related to canning and preservation so I asked about my two jars that broke in the Water Bath canner. The MFPs offered several reasons which I had already considered: defective jars, thermal shock, and It Happens. 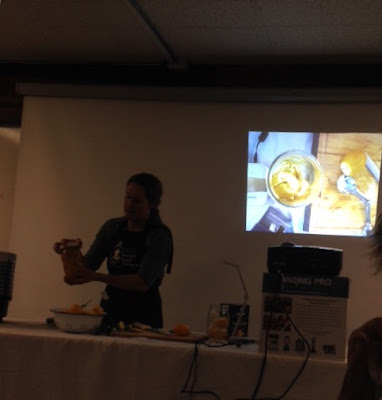 This morning I remembered that I had beautiful Meyer lemons from Jerry in my produce bin so I followed my take-home recipe for "Traditional Preserved Lemons" and made a batch of my own Salt Cured Lemons. 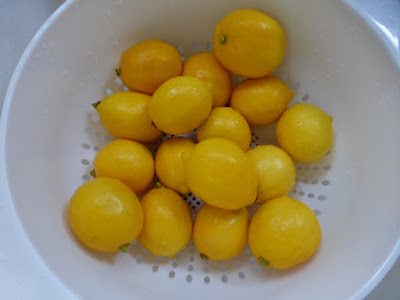 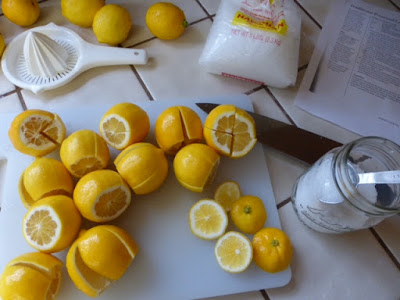 The jars will need to be turned upside down every day so I used the FoodSaver Wide-Mouth jar sealer attachment to vacuum seal the lids and prevent any leaking. Very nifty. 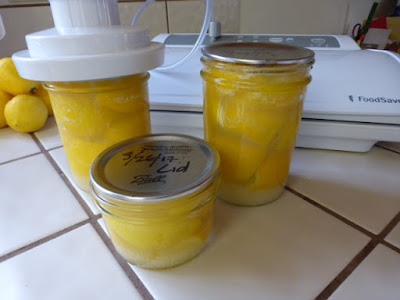 The lemons will need to soak in the lemony brine for two weeks. Then the pulp gets tossed (per Carla, MFP, "it's yucky") and all the saltiness gets rinsed off the peel. It'll be interesting to find out what it tastes like and what I'll use it for. But as Z. says, "Lemon makes everything better."

I've already signed up for the next Master Food Preserver's class in April: "Fantastic Fermentation!"

The first day of spring arrives in two days and already we're seeing a change to the fruits and veggies offered in our Talley Farms Fresh Harvest produce box. Our winter citrus - blood oranges and pink Cara Cara oranges - are being replaced by blueberries, asparagus, and English peas.

The sweet Cara Cara gets eaten right away but the blood oranges seem to accumulate in the refrigerator's produce bin. The blood oranges have a surprisingly dark red color, very exotic, but too sour for our taste. I find them to be more ornamental than edible (though I've read they make a lovely cocktail). 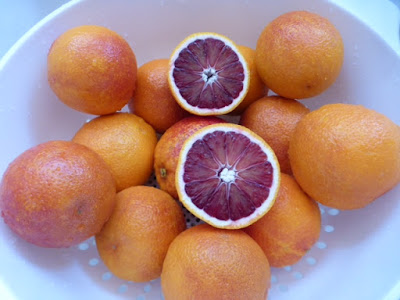 I decided to sweeten things up by making Blood Orange Marmalade.

I read several different citrus marmalade recipes and tried to find the easiest one to process the fruit. I'm not sure I found the easiest way but in the end I used my favorite Kuhn Rikon vegetable peeler to nick off pieces of zest, cut away the bitter white pith, and then cut the fruit out of the membrane (supreme). Learning to supreme the fruit was a new-to-me cooking technique and it made me feel so Martha Stewart. 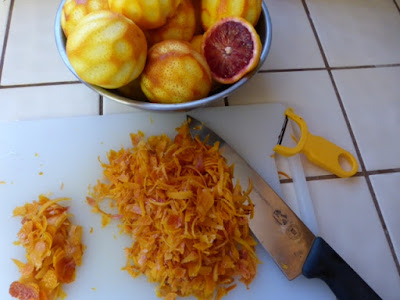 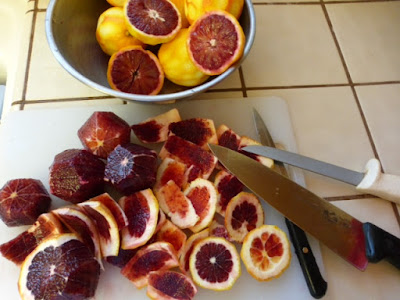 All the recipes called for collecting the seeds and white fibery pith, gathering it in cheesecloth, and making a pectin bag so you don't have to add commercial pectin. I took a pass on that process and instead used Pomona's Universal Pectin. The enclosed recipe in the box called for 3 cups of sugar. (In comparison, my Christmas Orange Marmalade required 9 cups of sugar with the box of Ball commercial pectin.)

The instructions for the Water Bath canning method are followed exactly as written. 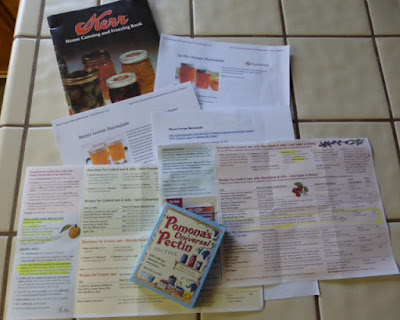 Our friend Jerry brought over Meyer lemons so they got chopped up as well. 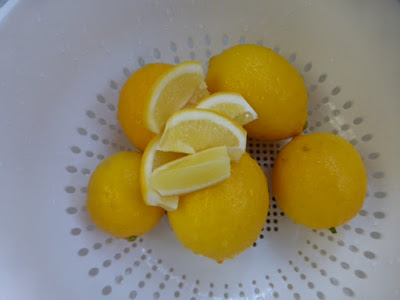 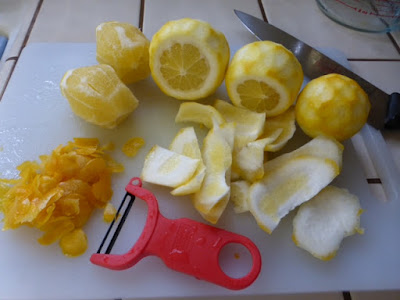 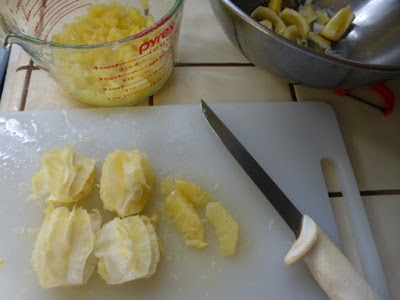 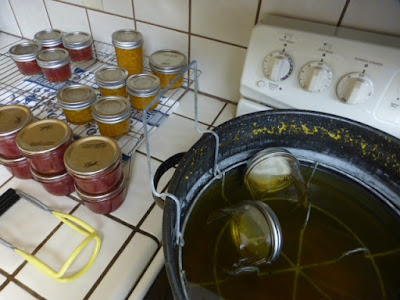 It took me two full days to make the Blood Orange and Meyer Lemon Marmalade. The Man commented that I could probably buy the same type of jam at Trader Joe's.

Of course he's right. But.

Behold! A taste of our winter, captured in glass jars. 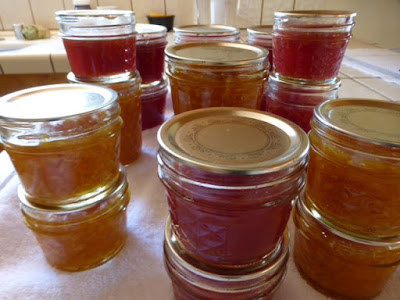 The last two weeks have been clear and sunny - a welcome reprieve from the rain, wind, and toppling trees. 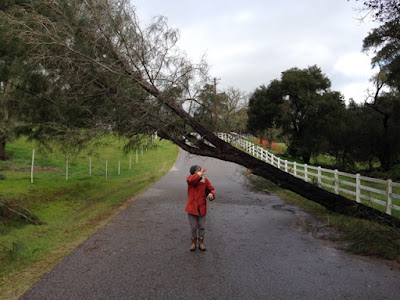 Everyone has been enjoying the break in the weather. 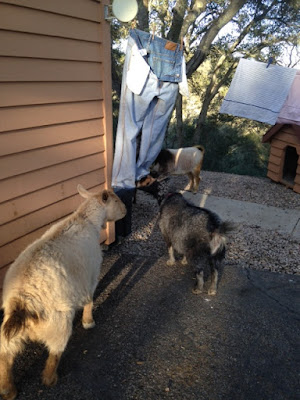 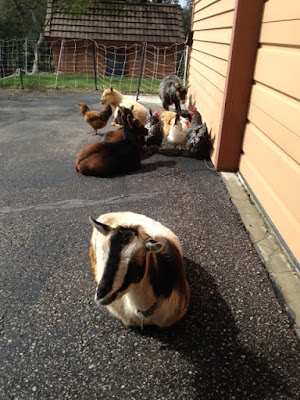 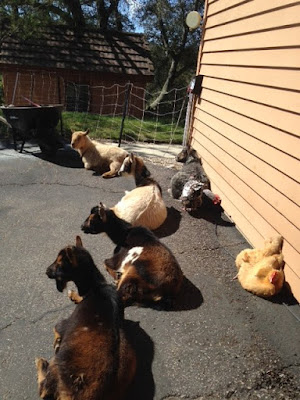 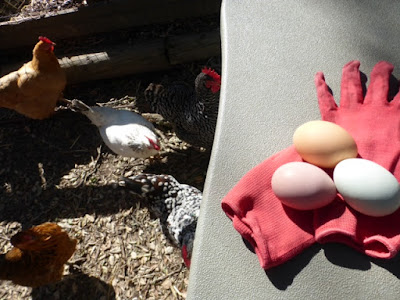 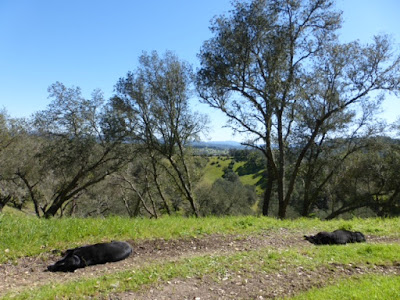