The Summer Series continues whereby the Great Outdoors is calling ~

Last month, The Man double backed to the High Sierras for another solo trip. This time it was a 5-day trek, as in the previous post, he left soon after coming home from our RV trip.

Cell phone reception is sporadic in the high mountains so we're not able to talk every day. When The Man gets me on the phone we'll go over his route together. For the most part his itinerary is made while he's on the road, i.e. - he's "winging it".

During our conversation we go over the direction he's headed and the roads he'd like to take. Map reading is not my strong point but eventually I'm able to follow along using Google Maps. The Man sketches his travel with the aid of his iPad's downloaded maps and the big red California Atlas. From the vantage point of my cushy desk chair I read him the descriptions about campgrounds in the area. While we're talking I take written notes so that I will have his last known whereabouts recorded, you know, just in case. 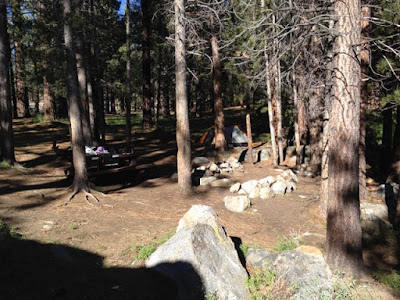 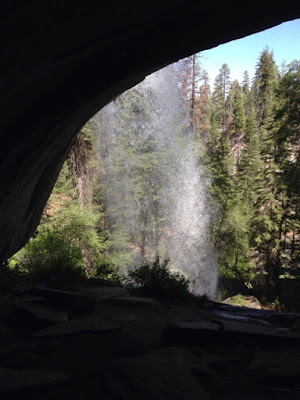 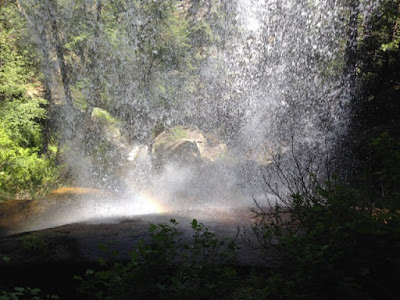 Pssst. Am I the only one to observe that The Man opts to leave for solo trips just after spending time with me in our 19-foot travel trailer? Yeah, you're right, silly me, it must be my imagination.

A few days after returning home from camping The Man and I were sitting outside, drinking coffee, when he mentioned he was planning a wilderness camping trip.

It was Sunday morning. We had just come home on Thursday. I turned to stare at him.

He saw my look and explained that he had wanted to explore some of the mountain trails before the summer crowds showed up. 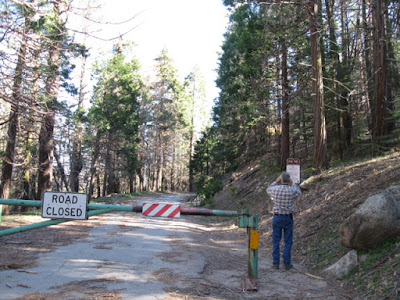 I knew he was planning a trip, I noticed him studying his big red California Atlas and the GPS maps, I just didn't know it would be so soon.

He reassured me that I wouldn't need to do anything, he had it all figured out. He couldn't take much more than his gear since space and weight were limited while traveling on the motorcycle.

While The Man packed - fitting objects like a jigsaw puzzle - I finished the knitting on his Sockhead hat. I didn't wash it, wouldn't dry in time, so I wove in the ends and gave it to him. For some reason he insisted I sew on a SLO Yarns label. I was pleased but surprised. Surprised because he's not usually appreciative of my creations, possibly traumatized from the first hat I made him, known affectionately now as the "Reservoir Tip" hat, but that's another story and I digress. 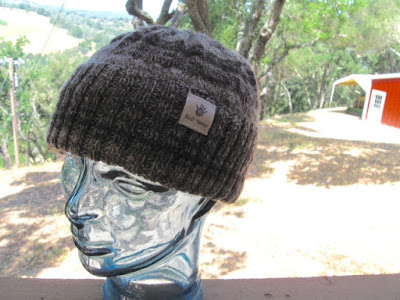 May 9th, early Tuesday morning, the Suzuki V-Strom was packed and ready to go. The loaded down bike and The Man headed east for a four-day trip to the southern Sierra mountains. 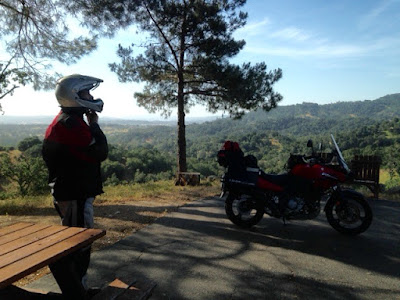 I headed back into the house for another cup of coffee.

Several hours later I received a text message. It was evident why The Man had wanted a SLO Yarns label sewn onto his knitted hat. Again I was pleased and surprised. I may have laughed out loud.


Another text arrived that afternoon while he still had a cell phone signal.


A couple of days went by before I heard from B. Beenie and The Man again.


I'm pretty sure The Man had a good time no matter what B. Beenie had to say. 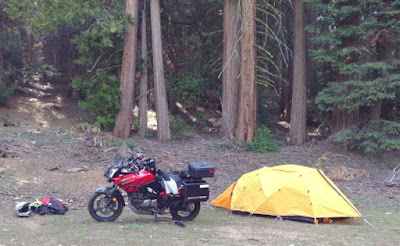 Out and About: The High Country

The Man and I made our first camping trip of the year to the southern Sierra Nevada mountains in early May. We found a dispersed campground along the Kern River called Calkin's Flat. 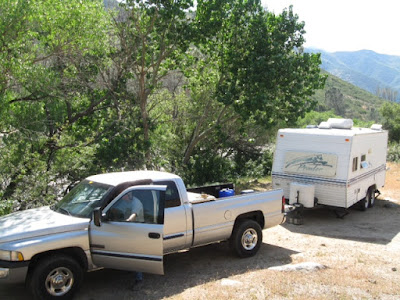 A dispersed campground is camping anywhere in a National Forest that is not a "maintained campground". Usually there's no services: no water, no outhouse, not even a picnic table. So Calkin's Flat campground was a fancy name for a flat spot along the Kern River. No matter, it's our favorite way to camp (no neighbors) and the price is right (free).

We set up our campsite by gathering rocks and building a fire pit for later in the evening. 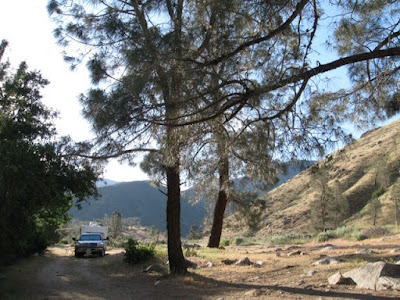 Then - quite suddenly - the silence was broken by the roar of jets. The training maneuvers lasted about 30 minutes before the jets returned to Edwards Air Force Base. (I waited much longer hoping for their return.) The next day we were ready for the airshow, sitting comfortably in our camp chairs with our drinks and snacks. 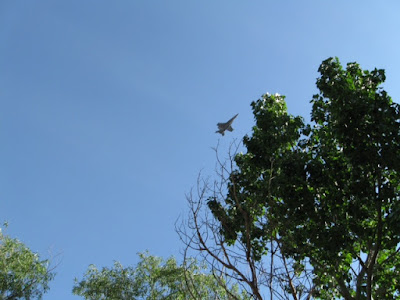 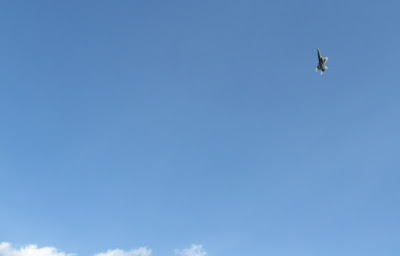 The Kern River was running high, fast, and turbulent with the early snowmelt. It was not conducive conditions for catching trout, not even a nibble. 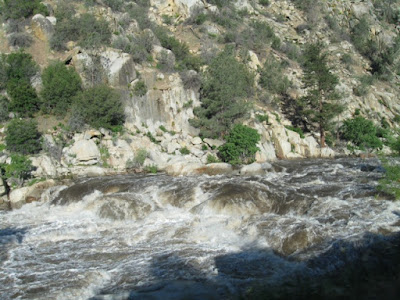 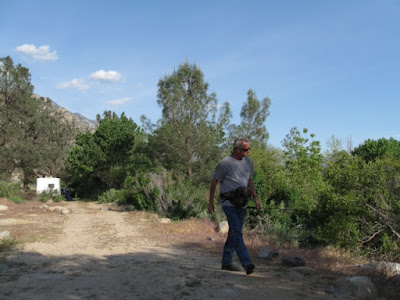 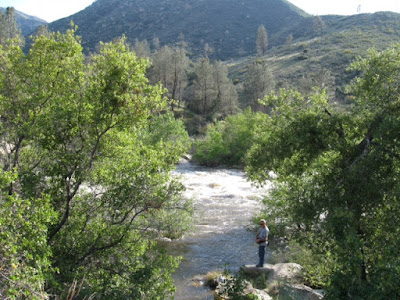 The next day we left the travel trailer behind and pointed the truck towards the high country. 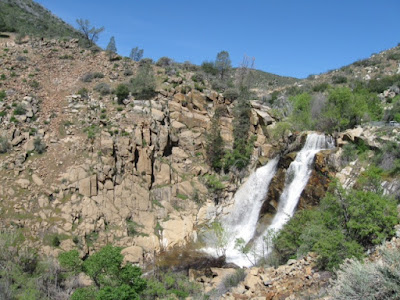 We climbed higher and higher through twisty mountain roads and switchbacks. It was a good decision to leave the travel trailer behind. 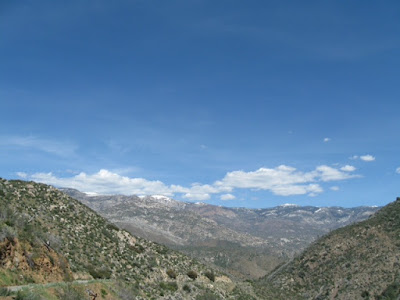 From the road The Man spotted a quiet stream and we stopped to check it out. I found a pine-shaded spot to sit and knit while The Man wandered off with his fishing pole. It didn't take long for him to return with dinner in hand. 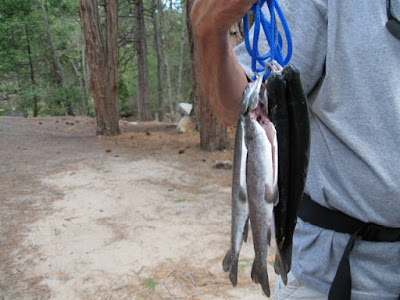 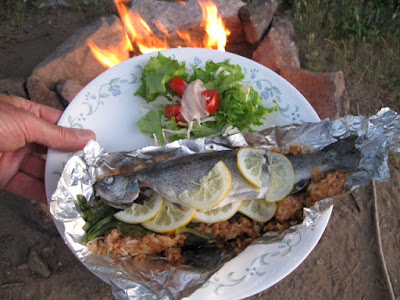 It was a quick trip and the next day we reluctantly headed home.