Satellite flare, also known as satellite glint, is the phenomenon caused by the reflective surfaces on satellites (such as antennas or solar panels) reflecting sunlight directly onto the Earth below and appearing as a brief, bright "flare".     Wikipedia

Last weekend The Man, Z, and I spent two nights out on the Vista.  After a quick dinner of take-out, Sylvester's Burgers one night and Bravo Pizza (with a big healthy salad) the next night, we were outside, from dusk to way past our bedtime gazing up at the night sky. The dogs came by every once in a while for nose nudges reminding us that it was also past their bedtime.

The Boy brought over his telescope; the same one that we had been hearing about for a couple of years. We were skeptical but Z reassured us that it worked. Really. 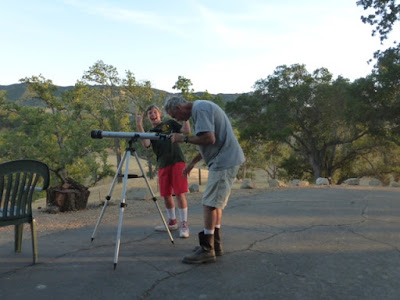 Surprise, it worked like a charm. Our natural world got a little bigger with the inclusion of the moons of Jupiter, Venus in a crescent shape, the rings of Saturn, the craters of the Moon, and satellite flares. 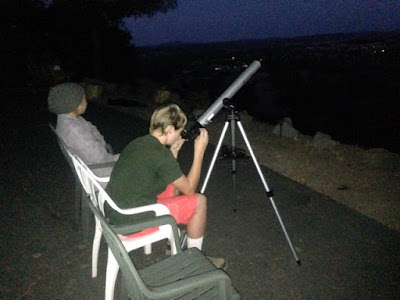 Man, oh, man, satellite flares, Irridium flares, satellite glint, whatever you want to call them. We call them awesome.

The three of us got pretty good at spotting flares - six eyes scanning the sky - and we were in the right place at the right time to see one literally light up the sky. It was unbelievably bright. No way you could have missed it. Lucky we have no near neighbors as the sighting caused quite a bit of surprised and excited hoots and hollers. YeeHaw.

Here's the thing I want to know: How could we have lived half of our lives, ahem, The Man and I, and not have known about this spectacular phenomenon? Me, understandable but The Man? He's the geeky, science guy and even he was unaware of what was happening right above our heads all these years. And I'm thinking of all those missed opportunities, the dark places we've traveled to via VW camper, RV, or Pelican - The Man's ocean-cruisin' fishing boat. Over the years we've been to plenty of isolated - perfect for stargazing - dark places.

But at least we know about satellite glint now. We're in the club, the Flare Fan Club.

Besides, we've got the cool kid in our club.