Last summer The Man and I visited our North County animal shelter to adopt a pair of outdoor cats. We were quickly shown the door. Little did we know that all of the cats, their cats, were indoor only. The look of horror on the face of the young woman helping us when I said "outdoor" made me wonder if she thought I said "BBQ". The young Cat Woman went to the office to get someone else to help us.

The Head Honcho Cat Lady came out to tell us that they didn't have any cats that would like living outdoors. We looked around at the cats lounging on their pillows, in an air-conditioned wonderland, and The Man asked, "How can you tell?" Her reply, "An outdoor cat wouldn't like being inside." Oh.

It was a disturbing experience and I left feeling like I was a bad person, a bad cat mama, because I would allow my cats to live outdoors.

In the months following I replied to a few Craigslist ads that were advertising outdoor cats in need of new homes. I offered to provide a good home to one, two, and even three cats. Unfortunately, it turns out there's crazy cat ladies out there who wanted me to adopt them along with their cats. Eventually I gave up and The Man helped me store my cat items back in the attic. 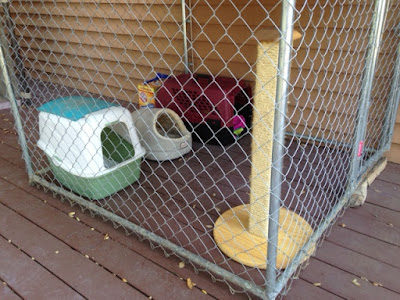 Fall and winter came and went. As the weather warmed up I started thinking about cats again. The need for a good mouser was everywhere: mouse traps were in the garage, the barn, and our cars. The Man warned you when you got into his truck, "Watch your toes", then he'd move the unsprung mouse trap away from your feet. In the barn soft nests were found under motorcycle seats, and in the garage acorns were found in shoes on the shoe rack. Each morning the animals' water buckets had to be emptied and cleaned because of the field mice that had drowned overnight. In the evening I would watch mice scurrying across the garage floor. We needed a cat.

It's been five weeks since we adopted two male cats from North County Paws Cause. The two boys had been at Woods Humane Society for several months and they were being "moved out" from the no-kill shelter. Ellen, a volunteer with Paws Cause, was contacted by Woods to find an alternate home - a safe barn or ranch home - for these two boys.

Ellen and I had spoken on the phone and she was aware of our situation. On the same day we spoke Ellen visited Woods to check out the two boys. She reported back that she thought they would be a good match for us and our environment. She gave me a heads up that the orange tabby "was in an isolated cage because he was too stressed with the noise and number of humans coming and going at the shelter". I noticed his picture and description was not posted on Wood's website.

Ellen arrived promptly at 11am after picking up the cats from Woods. The Man had been hesitant to have a stranger come to our home. The Man and I were reassured that Ellen didn't look crazy but we could see that her cats were. Through the clear plexiglass cat carrier we came face to face with a very angry orange cat who had bloodied his face and the inside of the carrier trying to get out. We watched him lunging at the thick plastic walls, snarling and growling at us the entire time. Undaunted I thought, hmmm, this guy's name is going to be Rudy, short for Rudolph the red-nosed cat. As Ellen carefully transferred Rudy into the chain link kennel we had set up in the garage a My Little Pony toy fell out of his carrier. 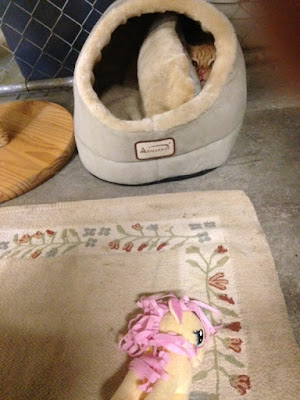 We got only a fleeting glance at the other cat before he burrowed under the heated pet pad. He was named Buddy at the shelter, it's a good name, Buddy it is. 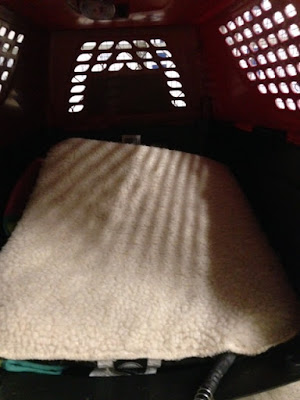 The days passed slowly as I took care of the new animals. Ellen had warned us it would take awhile for these two under-socialized over-stressed cats to acclimate to their new home and we should expect to have them enclosed for four to six weeks. She also suggested I wear gloves when I was near them. I tried but it made my cat chores too clumsy. Instead I moved slowly and carefully within the 5'x5'x4' wire enclosure. I kept my hands away from their houses even though the boys remained hidden beneath their bedding.

Every evening I sat next to their wire enclosure and read out loud to them. Eventually Rudy stopped growling at me. It took a week before Buddy would remain in view instead of hiding under his pet pad. On the tenth day they were released out of the kennel to wander freely in the enclosed garage. I was surprised at their size as I stroked their thin backs; at two years old I thought they would've been sturdier. 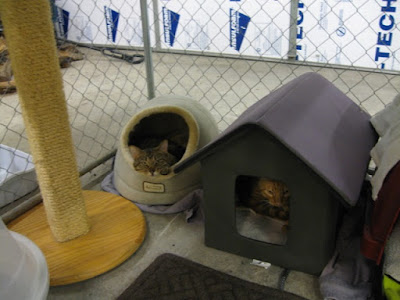 On the seventeenth day they went outside, it was the day after Buddy went berserk. Everything had been going swimmingly, they were gentle with me but more importantly they were bonding with one another, even sleeping together. Nothing seemed out of the ordinary until I turned to see Buddy with his hackles up, his ears flat, his tail huge and fluffed out, and ready to attack Rudy. He hissed and snarled as if he didn't recognize his friend. He was clearly not playing. As I waited for Buddy to calm down I replayed what could've happened: the cats were playing together ... I was moving my bike ... I hit something ... there was a loud bang ... Buddy went berserk. I quickly Googled "Sudden Aggression in Cats" and read that it could be Fear Aggression from a loud noise. Oops. When it was obvious that they might hurt one another I locked Rudy in the kennel and separated them for the night.

The next day I let Rudy out of the kennel into the garage and for the first 3 minutes it was okay before Buddy turned on Rudy again. This time Buddy went in the kennel. I fed them additional wet canned food for breakfast and put their bowls side by side separated by the chain link wire. They could look but not touch.

The Man and my friend Sandee suggested perhaps it was time to let them out, maybe they were going stir-crazy. Rudy left the garage first, then Buddy was released from the kennel. They were so busy exploring their bigger wider world they forgot to battle one another. 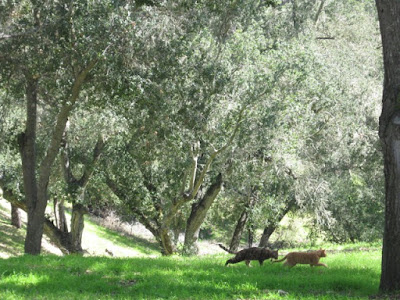 Nowadays the boys spend their daylight hours outside, still sleeping in the garage at night. They come when I call them and they've learned to maneuver nonchalantly (for the most part) through the gauntlet of goats, dogs, and chickens. 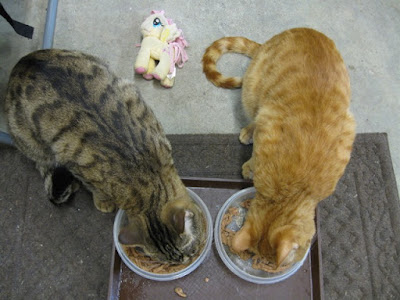 The boys are still settling in, but so far so good, I'm glad they're here. 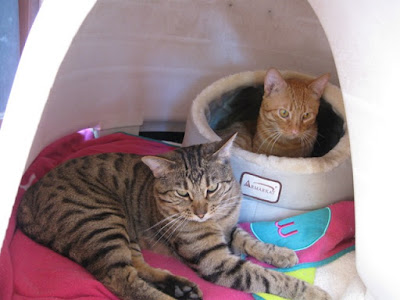 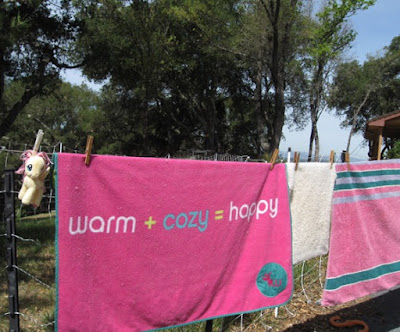