Right now it's 57° outside and the windows and doors are open, a slight breeze stirs the cool air inside the house. The early morning cool down helps to keep our well-insulated home comfortable through the heat of the day and we rarely need to turn the AC on. Another hot day is expected, 100° and upwards.

My animal chores are done: everyone has been fed, the goats and chickens are out and about, all the water buckets have been refilled. 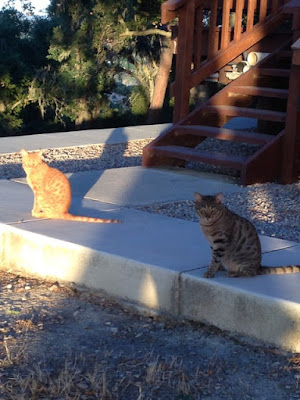 In just a bit I'll go back outside to water my small garden. The volunteer heirloom cherry tomatoes are thriving. Last year I planted Yellow Pear and Chocolate Cherry tomatoes so I'm not sure what's coming up. I didn't intend to grow reseeded plants from last year's crop but I dithered too long and there they were. They took well to being transplanted to their own pots and I already see a couple of teeny tiny tomatoes. 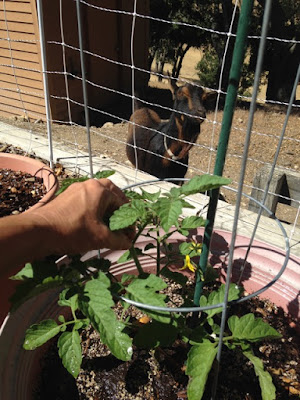 As I pass by an open window I notice the air smells clean. Last evening the air was thick with smoke from a 1500+ acre grass fire north of us. It was the third fire in two days situated at the training area at Camp Roberts. The first fire occurred just past midnight, I caught the whiff of it at 2 am. Luckily the first two fires were put out quickly. Hopefully they'll be able to put out the "Yankee Fire" as easily as pinching out tomato suckers.

In early spring I was dismayed to discover a freshly laid egg with a hole. The egg was found inside the coop, in a nesting box. At first I thought the hole was made by a ground squirrel attempting to steal an egg. Unfortunately it started to occur day after day, my egg count dropped to zero, and I was forced to concede that I had a misbehaving chicken.

I didn't know who the culprit was or what prompted the destructive behavior. I found it a small consolation that it was just the egg's outer shell and the inner content was not being eaten.

Purging the flock of four was not an option but I did know the outcome would be grim unless I could come up with a plan. 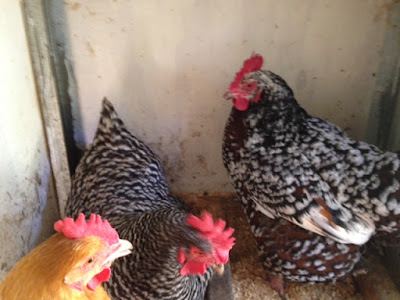 First, I added a golf ball to the two ceramic eggs in the nesting box since pecking a hard object might deter further pecking. Later, I removed the golf ball and the fake eggs, maybe the nesting box was too crowded.

I made sure to offer plenty of fresh free-choice Oyster Shell calcium supplements. 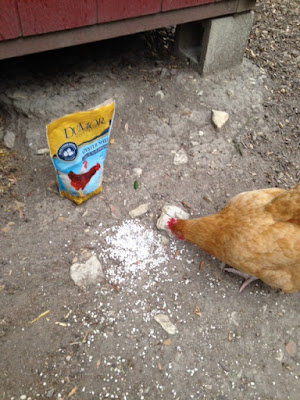 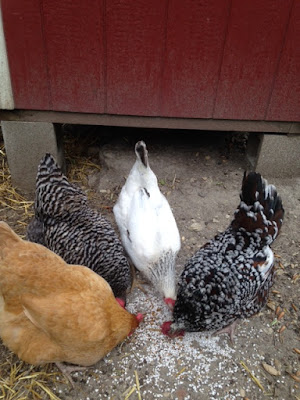 In early April I started a Chicken Notebook: a daily record of who, what, and when. That is, I recorded who was on the nesting box, the results, and time of day. The first two days I trekked back and forth from the house to the coop every 60 minutes to record my results. Luckily I didn't have to keep up with this grueling hourly schedule for too long. 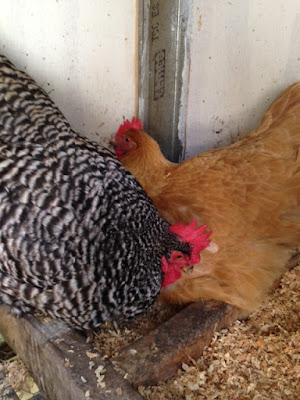 I learned that it takes 26 hours for a chicken to form an egg so that made it easy to figure out when to expect an egg. For example, if Brandy laid an egg at 10am today, then tomorrow I would expect to find her sitting on the nesting box at noon. My timing became spot-on, enough for me to witness several eggs being laid. Now that is fresh.

The Girls also seemed to lay between the hours of 10am and 3pm, and they took Sundays off. Go figure. 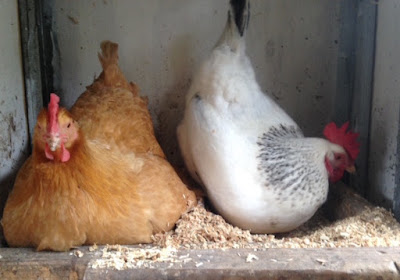 I also learned that if I wasn't able to gather the eggs in a timely manner, I would find an egg with a hole. It was a sad day when I had to throw away three pecked upon eggs. It didn't take long before I got into the routine of checking the coop at 10am, 12noon, and 2pm. 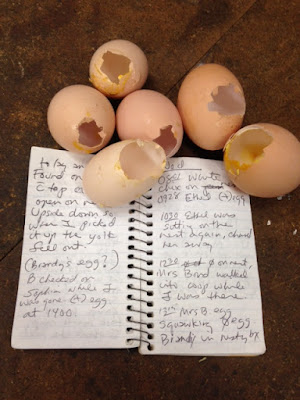 The last pecked egg had been recorded on May 8th so for the last couple of weeks I've cut my coop visits down to once a day. The noon visit often reveals - one, two, and sometimes three - beautifully intact eggs. I'm on the last page of the Chicken Notebook and I won't be starting a new notebook.

Now that the chickens seem to be behaving. I've deemed the Egg Project a success.
The measure of success?
One egg,
just one egg at a time. 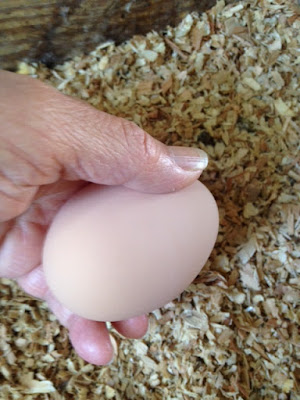