A couple of weeks ago on a Monday morning, Rudy, my orange barn cat, did not show up for breakfast. It was unusual that he was not sitting on the deck, meowing for me to hurry. Buddy, the brown cat, was waiting but not interested in the kibbles I offered. Instead he walked away from his bowl and I followed him down the stairs and out to the edge of the driveway. As Buddy gazed out over the Vista I called Rudy's name.

By mid-morning I knew something was wrong, Rudy had still not shown up. The goats and the dogs followed me as I searched the property. I looked everywhere. It was time to widen the search and check the neighborhood but as I headed out I saw Buddy sitting on the edge of the driveway again. I asked The Man if he'd take a hike with me out on the neighbor's ranch and he agreed. 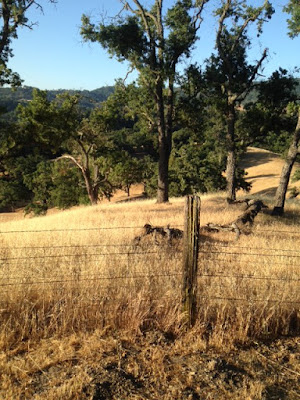 We climbed over the barbed wire fence and walked through the dry landscape. I called Rudy's name and when we got to a cluster of oaks we heard an answering meow. We found Rudy, perched high above us, in an old oak tree. 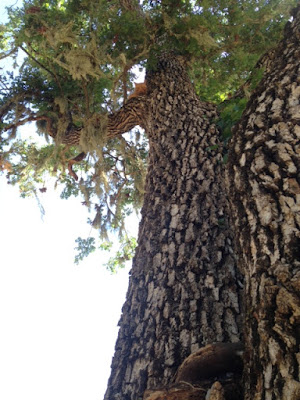 Of all the oak trees to be stuck in Rudy had chosen Tree #2660 (identified by it's metallic tag). This particular tree had a very healthy, very leafy, poison oak bush growing upwards alongside the tree. We looked up, we looked down, poison oak was everywhere. The Man, who has had a miserable prior experience with poison oak, let loose a long stream of expletives: &*#%*cat*&$#%!! 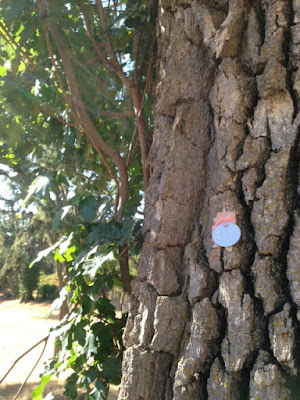 Our attempts to cajole Rudy down from the tree was unsuccessful so The Man and I trekked back home to get a ladder and cat food. 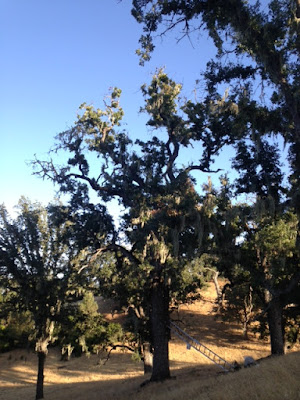 Our efforts to rescue the cat scared him even more and instead of coming down he climbed up even higher. We decided it was best to leave him alone and let him calm down. We headed back home.

On the edge of the driveway, overlooking the Vista, The Man set up his telescope so we could keep an eye on Rudy. He wasn't that far, as the crow flies, I knew he could see us so I left my red fleece jacket on a fence post so he could find his way home. I could hear him answer me when I called his name. 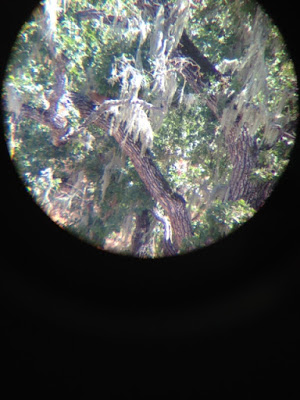 Later that afternoon, his meal time, we went back to Rudy's tree with his dinner. Again, no luck getting him to come down. 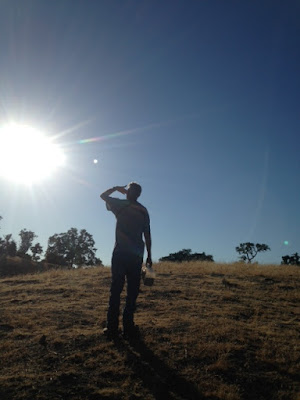 The next morning, Tuesday, for some unknown reason Rudy had climbed up the trunk of the tree to the branch above. He had gotten himself even higher up the tree. Now he was nearly 50 feet up in the air. 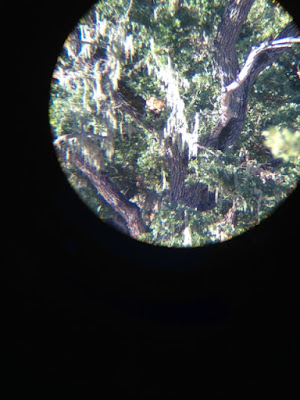 The Goodyear Blimp passed overhead as we headed out to Rudy's tree. 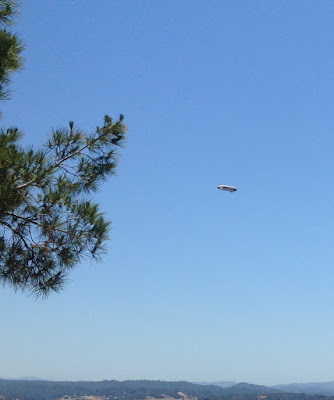 The cat looked down at us as I threw out a bunch of cockamamie ideas for The Man's review: wood planks to make a ladder like we did for the baby bird, renting a cherry picker, sending up a box or basket to haul Rudy down. The Man liked the basket idea.

We went home to gather supplies and later trekked back to Rudy's tree with a large sturdy basket, wet cat food wrapped in plastic wrap - "a meat ball", bowl of water, and Man tools: a small bucket filled with coiled nylon rope and metal shackles of various weights.

The Man tied a heavy weight to the end of the rope and was able to throw the weighted line over a branch - the same branch that Rudy had been on the day before - and subsequently haul up two separate ropes, one for the basket, and one for the meat ball. Expletives abounded as various weights and nylon rope landed in the poison oak.

On the walk home The Man had second thoughts about the set up and we turned back in order to secure the ropes off the ground. He didn't want any cows getting tangled up in the lines. I wrote a note to the Ranch Caretaker that stated, "We're trying to get our cat out of the tree. We'll clean up when we're done."

Rudy was in the same spot when we returned later that afternoon. We brought the basket back down and replaced the meat ball with dry kibble. I was afraid the odor of spoiled cat food would attract the attention of crows or buzzards.

Wednesday morning, Day #3. The cat was still on the high branch. The Man looked at my face and said he felt like we were under siege.

I continued to visit Rudy twice a day - early morning and late afternoon - and attempted to entice him with food and water. I played an audio recording of Buddy meowing at mealtime, though mostly it was the sound of dry kibble being shaken. Buddy wasn't talking much.

Buddy showed up twice a day for meals and disappeared after he'd eaten. When I did see him he didn't want to be petted. His tail was held at half-mast and he seemed to always be listening. It made me even sadder.

I put a call out to the Universe to help my cat gain the courage to come down from his tree.

Thursday morning arrived cold and foggy as I walked to Rudy's tree. I knew there was lichen on Rudy's branch - I could see it through the telescope - and I hoped he was able to lick some moisture off the moss. Although the summer days had been mild - highs in the upper 70's - it was just a matter of time before it heated up again. I wondered how long a cat could live without water.

Later that afternoon as I trekked back out to Rudy's tree I was surprised to see The Man there. He was wearing his white hard hat. He said he was going to make another attempt to get the basket higher, to the same branch where Rudy was. I turned around and went back home to retrieve a can of cat food.

It only took The Man a couple of tries - and a few choice words - to reposition the throw line and get it up to Rudy's branch. Loud expletives could be heard from Rudy but luckily he moved out of the way horizontally on the limb rather than vertically up the tree trunk. The Man hoisted the basket - with food and water - up to Rudy's branch. 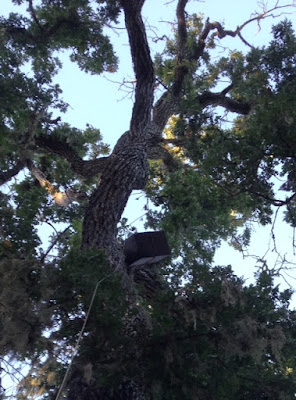 I stayed till sunset, talking to Rudy, telling him how brave he was, all the while hoping I could bring him down in the basket. He made no move towards it, I could barely see him, he was up so high. 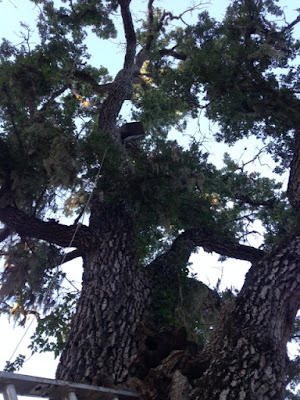 When I got downstairs Rudy was waiting by the glass door. I turned around and ran back upstairs to tell The Man, "Rudy is home". "What?" "Rudy, is home." Then I went downstairs to feed my cats.

Rudy looked good. He was energetic, his voice was strong, and he had a very good appetite. Not what I had expected from a cat who had been stuck in a tree for four days. 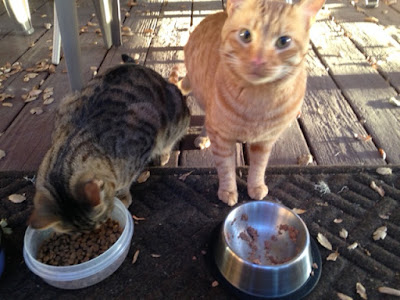 The Man and I returned to Tree #2660 to retrieve the ladder, the ropes, and all the other rescue paraphernalia we had brought to Rudy's tree. When The Man brought the basket down he saw that the containers of food and water were empty. Rudy had been able to eat and drink the food that was left for him.

The Man is my hero, I am sure he saved my cat's life. 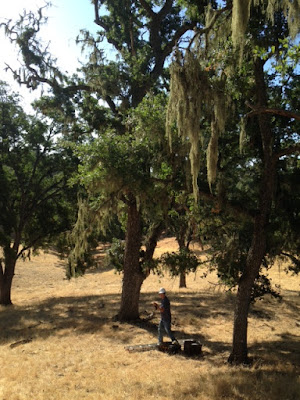 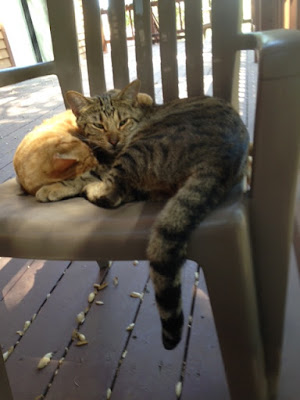 Oddly enough later that same morning an Arborist working with PG&E stopped by the house for our annual tree review. I mentioned that we sure could've used his help earlier in the week. He was sympathetic but he replied, "We don't do cat rescues." 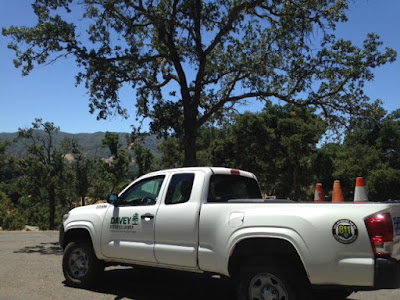 You would think Rudy would stay out of trees, but no that's not the case. In fact, he's become quite the tree climber. I often see him looking up at the oaks, sizing up the tree, then scrabbling up the trunk. If I'm nearby he calls to me from above. I take a slow deep breath, keep my eyes down, and as I walk away I call him to follow me. 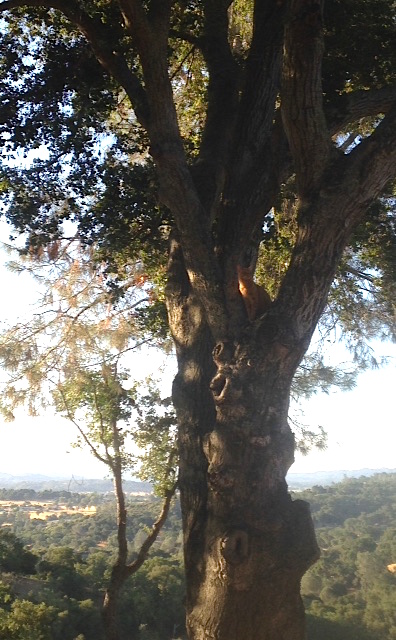 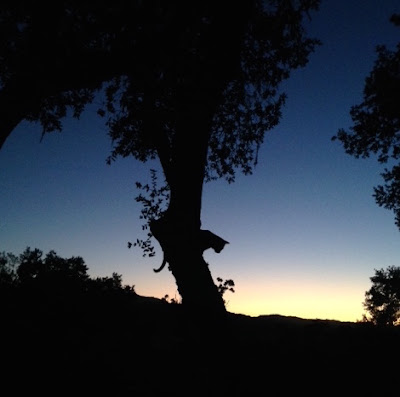