Several people have asked me the same question: "You have a knitting machine? Isn't that like cheating?" Before I answer their question I glance at The Man, and sure enough, he's got the "I told you so" smirk on his face.

If you think it's cheating, well then it's only half cheating, my hats are both machine knit and hand-knit.

Basically I cast on to the addi Express King with waste yarn, crank for awhile, then cast off with waste yarn. When I remove the waste yarn the stitches are "live" and ready to be picked up with my knitting needles. Then I knit a 1x1 rib brim on the bottom and a knitted decrease for the top. The body of the hat - the middle section - is knit by the machine. 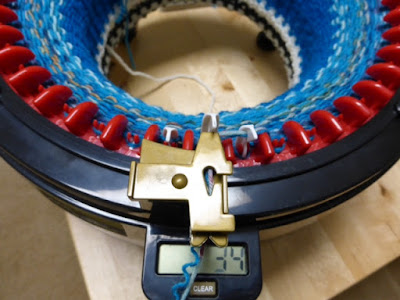 Sounds easy-peasy but there was definitely a learning curve for using the device and I'm still tweaking the pattern to get a good-fitting hat, i.e., one that is not too long, nor too short, you know, just right. It's not instant knitting but it's fun to see what I can create in a few hours as compared to a few days.

Right now my completed hats are squeezed in between eight Comfort Scarves and nine colorful skeins of soft fuzzy yarn. 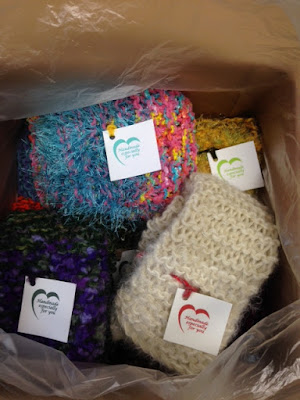 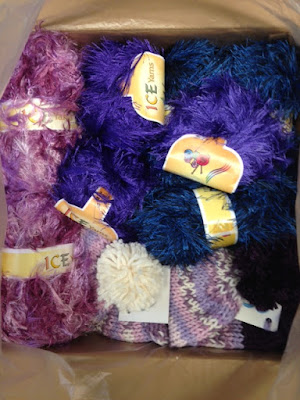 The big box of yarny goodness is ready to be mailed out to Leslye Borden of Handmade Especially for You charity. The five knitted hats are intended for the children at the Women's Shelters. 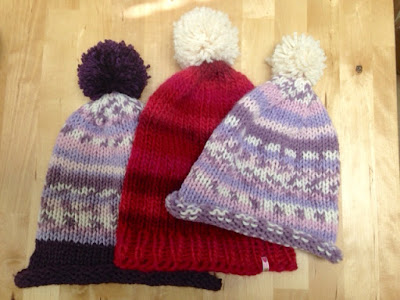 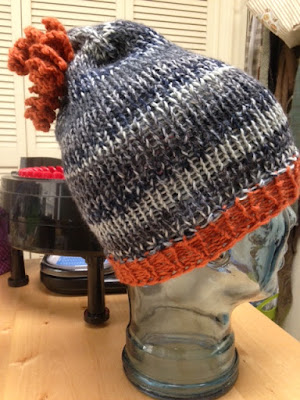 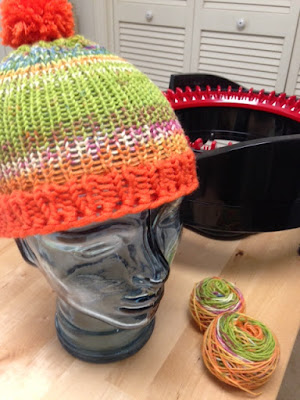 You know, come to think of it, I don't think I'll worry too much about what people say about my knitting machine. Oh, and the pompoms? They're made with a pompom maker do-dad.

How do I love thee? Let me count the ways.  Elizabeth Barrett Browning

Amazon Prime Day, July 12, 2016, I was counted as 1 out of 215,000 people that purchased an Instant Pot. The multi-functional 7-in-1 electric pressure cooker was the top seller of the day. The funny thing is I didn't even know I needed one, heck, I had never even heard of an Instant Pot and I wasn't even a Prime Member. But I got one anyway because, well, I did need a new rice cooker. 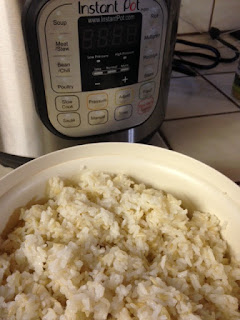 The first thing the User Manual recommends is to boil water as a test run. Thataway, you get used to the device, it's features, and to make sure "your unit is working perfectly". I decided to watch it work perfectly from a safe distance. 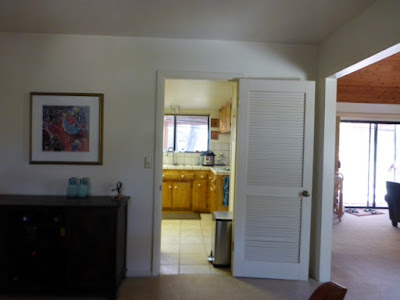 The Instant Pot is amazing. It was especially perfect for summer cooking when it was just too hot to cook. I could set it, forget it, and spend my time outdoors. 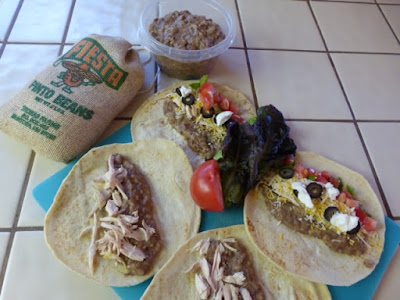 Fall is here. For the most part the days and nights are getting cooler though you wouldn't know it from last week when San Luis Obispo peaked at 108°, it was the highest temperature across the nation.

The cooler weather makes for great baking weather. I spent the last two days in the kitchen churning out yummy goodness: Zucchini Bread, Brownies, and Fruit Cobbler. Most of it is being given away but I've made sure to save a slice and bite for The Man. Oh, and of course the Cobbler needed to be paired with homemade Vanilla Ice Cream. Of course. 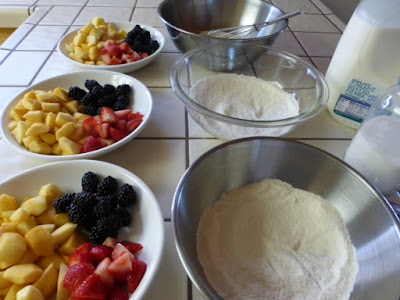 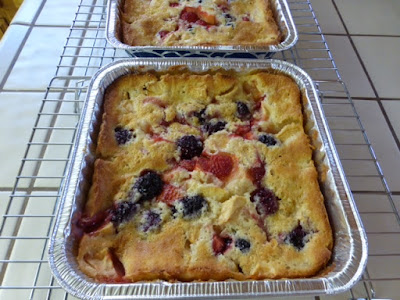 Our newest additions to the herd and flock have settled in and now that Mama Legs and Edie have proclaimed themselves "Queen of All", the rest of the critters seems to have resigned themselves to their ruling. I'm just grateful the daily drama of bickering and fighting have subsided.

We've had losses over the summer and said goodbye to our two good hens, Baby and Tandy, and also, Molly the cat. They were all very good girls.

Another loss, surprising to say the least, happened last Monday night at 11pm. We were suddenly awakened by an immense CRAAACK.

Armed with flashlights we went outside to view the damage. When I came back in the house a few minutes later Mattie looked at me expectantly. "A branch fell down." She turned around and headed back to her bed. To her retreating backside I said, "A really big branch." And it was.

We were up at first light to survey the damage and begin the clean up in the cool morning air. This time we got off easy. The only damage sustained was a section of wood on top of the retaining wall. 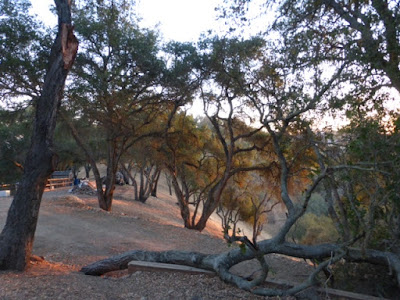 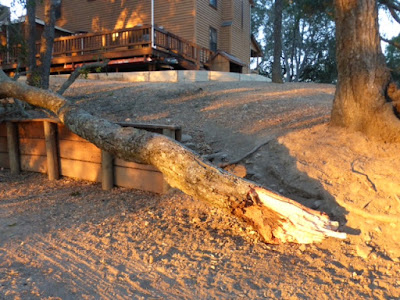 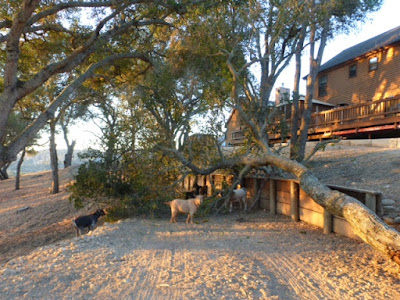 So here's the thing: it's called Summer Limb Drop, a phenomenon that happens in late summer, quite suddenly and without warning, and it can be catastrophic. During a hot day the oak trees suck up a whole bunch of water and release the moisture through their leaves (evapotranspiration). But when the temperature difference is so great - 100° during the day and quickly down to the 50's at night - the oaks don't get rid of the excess water, leaving their branches heavier than normal and apparently too much to bear. The Man noticed how water-logged the branch was when he started cutting the thick limb, it dripped with water. 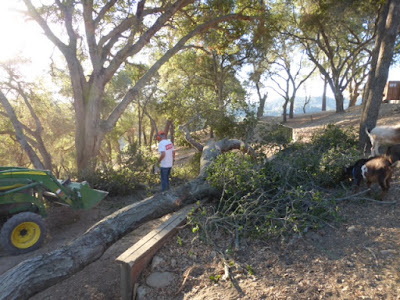 Now that we know about it we'll add Summer Limb Drop to our BE WARY LIST (right under Mountain Lions and Rattlesnakes).

And here's a note from me:

After much thought and consideration I have decided to spend a little less time on the SLO Yarns Blog. Currently (and for the past four years) I have posted a story every week. Starting this week I'll be cutting back to every other week. I think this will allow me more time to be truly out and about and I'm hoping to spend more time with The Man 2-Up. Besides, except for the occasional giant tree limb falling out of the sky not too much happens around here. wink wink