We went to see Singer/Songwriter, John Prine, in concert Friday night at Cal Poly's Performing Arts Center.  We had amazing seats on the balcony; the chairs swiveled and rocked and there was no one sitting behind us.  Very fun.  In 2002, we saw John Prine play at the Hawaii Theatre in Downtown Honolulu. 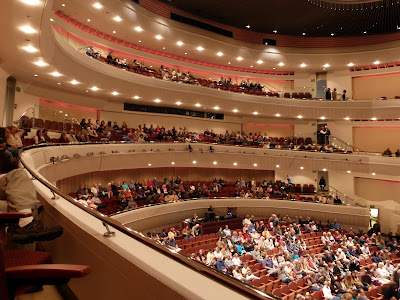 John Prine started out a little rough.  Literally.  His voice was hoarse and raspy for the first few songs.  He mentioned allergies and the water he sipped didn't seem to help but a swig from a capped bottle brought his true voice back and I pantomimed my relief to The Man by wiping my brow.  Phew. 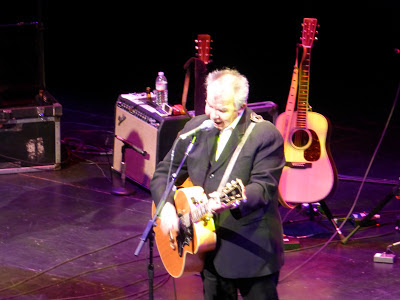 He sang for the next two hours and told his stories including the one about the woman who wanted him to sing The Happy Enchilada song.  She mistook the lyrics "half an inch of water" for "happy enchilada".  And though his voice was fading, he returned to the stage and sang several more songs for his hana hou.

Another photo ganked from The Man:

Heating Up, Cooling Down

We're inching towards summer and already have had a few days in the high 90's.  Not receiving much rain this winter, the hills are quickly turning brown.

The Wild Things have found ways to cool themselves down.


We successfully cooled down Sweetness after four days of Broody Rehab and The Girls have returned to their usual chicken behaviors.  Well, they'll need a "chicken reboot" this weekend since we found six eggs under the deck but other than that the flock of four are fine.  For now.


(Broody: being in a state of readiness to sit on eggs to hatch them; marked changes in behavior and physiology <a broody hen>.)

One of The Girls has gone broody on us.  It didn't happen overnight but it did take a few days before we even realized something was wrong.  Mainly, I noticed the quiet when The Girls were around.  Oh, sure, they made their usual chicken squawks and sounds but something was missing.  Or someone.

Sweetness, the Red Leghorn, was missing.  Sweetness, the goofy one, oblivious of her surroundings or dangers from above (hawk!), always talking to herself.  That was it, I realized, it was quieter because I wasn't hearing her happy murmurings.

Each time I looked for her I found her in the coop, sitting on a nesting box.  She clicked at me, gave me the chicken eye, puffed herself up and went back to sitting.  After removing very warm eggs from under her I let her be.

After a couple of days of this strange behavior I did a Google search and discovered that Sweetness was being broody.  She wanted to be a Mama.

I guess a hen can turn into henzilla when she's being broody.  But, Sweetness, aptly named was her usual sweet self.  No fighting or biting even as I removed her from the nesting box.  Temporarily she forgot about her broodiness and acted like her usual chicken self (eating and drinking, chasing a flying bug, and scratching the ground) before returning once again to the nest.

Unfortunately for her it's not meant to be.  For one thing you need a rooster for a fertilized egg.  We could probably adopt a fertilized egg or two from one of the neighbors, but we really don't want any chicks or any more chickens.  We're happy with our flock of four and The Girls seem to be quite content with one another.

So yesterday Sweetness was locked up in Broody Detention.  For the next few days she'll be in the garage housed in an extra-large wire dog crate.  We have a little fan set up and the airflow through the wire cage is supposed to bring her body temperature down and (hopefully) snap her out of her broody ways.

The other Girls have been visiting her and sharing a snack or two.

Maybe one day Sweetness will be a Mama but not this time around.

To our own Mothers, YH and MKP, Happy Mother's Day.

Email ThisBlogThis!Share to TwitterShare to FacebookShare to Pinterest
Labels: TheGirls

(Daze: to dazzle or amaze.)

We just never know what we'll see when we look out our window:

Email ThisBlogThis!Share to TwitterShare to FacebookShare to Pinterest
Labels: critter

In early April, I came upon a group called Handmade Especially For You.  A group of volunteers who knit or crochet "comfort" scarves for sixty California Women's Shelters from San Diego to Central Coast SLO County.  Founded in 2008 by Leslye Borden, her mission is for "every woman who comes into a shelter to receive a comfort scarf simply because she was brave enough to leave her abusive situation".

Handmade provides free yarn to use.  The yarns have been generously donated by yarn companies, local yarn stores, or from people's own yarn stash.  Multi-strands of diverse yarns are combined in creative and colorful ways, the volunteers call them "magic balls" because they become such beautiful scarves.  Handmade requests a donation to cover the cost of shipping which has become a considerable cost to them nowadays and is their biggest (and almost only) expense.

I sent off a donation via Paypal and a few days later received a box of eight magic ball kits.  I'll have to say I am usually not a fan of fun fur, eyelash yarn, or other types of "novelty" yarns but I was instantly charmed and smitten by these magic yarn balls.  The color, the texture, the softness - it all made me smile. 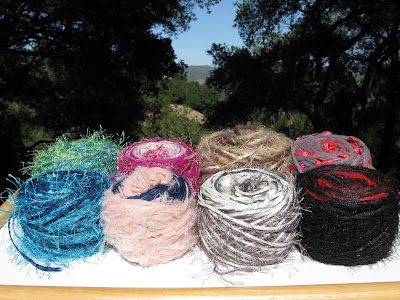 I had to make a little purchase before I started knitting as the soft, lofty scarves require being knit on large-sized needles:


For the next two weeks I happily knit one comfort scarf after another on my bambucha US 17 needles.  On such large needles the scarf only required 10 stitches across.  I knit until the yarn ran out for a recommended finished size of 4 inches wide by 60 inches long.  On the back of the "Handmade with love especially for you" tag I personalized (handcrafted with aloha) and signed my name and attached it to the finished scarf.  The scarves are soft as a cloud, cozy, and colorful.


I mailed the finished scarves back to Handmade Especially for You.  I'm looking forward to my next box of Magic Balls of Love.