"If you see a snake, just kill it - don't appoint a committee on snakes."  Ross Perot

I'm not afraid of snakes.  It's probably just because I don't know any better.  Growing up in Hawaii, where there are no snakes, you don't develop fears from bad encounters.  Over the past year we've had numerous close encounters:

Almost touched this guy while reaching for the garden hose ~ 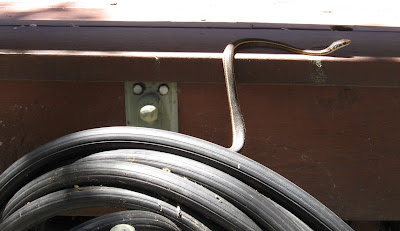 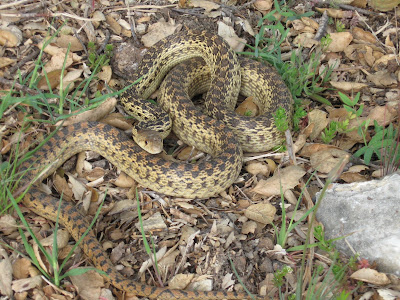 It was already getting dark last week when we started our nightly walk down the driveway with The Goaty Boys.  Just a few feet in front of us I saw a large dark shape slowly moving across the driveway.  It was too dark to make out what kind of snake it was but The Man ran back to the garage for his "varmint deterrent" while I kept an eye on Mele and The Boys.  While I was chattering about "good snakes" The Man stopped this one once with .22 birdshot (and then another two times for good measure). 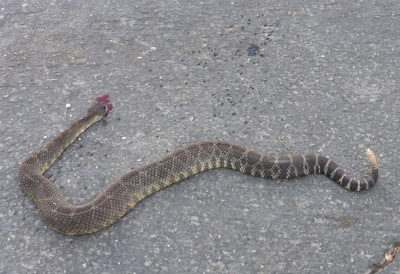 Our neighbor, Rod, said he's seen two rattlesnakes in the seven years he's lived there; our other neighbor said she's seen two in thirty years.  I'm not sure if I count myself lucky to have had two rattlesnake encounters in less than two years.  And, unfortunately, it's not the same snake I met last September.

The Committee on Snakes voted unanimously that venomous snakes were not welcome.