Chickens are the greatest.  Who would have thought?  The Man says, "You feed them garbage and they provide you with delicious eggs."  (Garbage?  I guess he doesn't notice that I wash all the veggie scraps carefully and chop them up into beak-sized pieces.)

After BeBe died it just didn't seem like we were getting enough eggs.  I think I've mentioned before that the Red Leghorns are great layers, the Speckled Sussex not so much.  I felt like we needed more chickens.

We checked our local Hay and Feed stores and kept an eye on Craigslist.  We wanted fully feathered chicks so we didn't have to deal with a heat lamp.  I wanted to get two so they'd have each other to stand up against The Girls.  I was pretty sure Sophia was going to give them a hard time.

We found just what we were looking for a few weeks ago in Craigslist:  Buff Orpington and Barred Rock pullets.  I wasn't sure if I wanted two Buffs or two Rocks.  Since these Peeps were together we brought home all three. 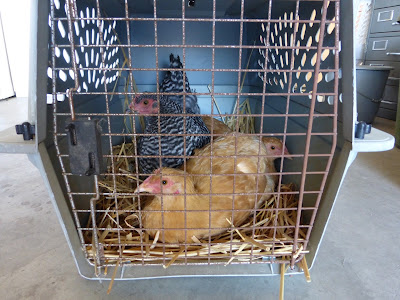 It's a little nerve-wracking to watch Sophia establish dominance.  The Man has been calling her "The Hag".


The Newbies spent five days in quarantine (chicken wire around their crate) and another few days in the garage without the wire before we moved them down to the Pen.  We kept them locked up in the Pen during the day and brought them back to the garage at night.

The Newbies are now free range during the day and sleeping in the coop at night.

The Man was finally able to get the livestock out of his garage.