This morning, The Man and I attended an extended education class at Cal Poly entitled "Disaster Science".  It was the introductory course for the new Cal Poly Preppers series "designed to help San Luis Obispo County residents and their families prepare for the initial 72 hours after a disaster or emergency".  The instructor presented an overview of upcoming classes and then spent the next two hours on climate change, global warming, and assessing disaster risks.  Truthfully, we live in an amazingly beautiful but dangerous place: wildfires, earthquakes, and tsunamis.  And then the game changer, Diablo Canyon Nuclear Power Plant, just 20 minutes away.

At the beginning of the class I had positioned myself against a wall and behind The Man.  When the graphs started showing up on the Powerpoint slides I started knitting.  I swear I absorb info better if my hands are moving.


The three-hour class ended at noon so we headed to Woodstock Pizza in SLO Downtown.  They've been around since 1980 and we've been eating their pizza for over 25 years.  Two more classes are scheduled for the end of the month but we haven't signed up yet.  Where to go for lunch?


And, this week's project - researching Pressure Cookers.  Our friend, Jerry, provider of apples, log-splitters, and seafood gave us a whole fresh-frozen albacore which he helped us stuff in the outside refrigerator.  It fits, barely, and he's got another one to give us before he leaves for albacore fishing at the end of the month. 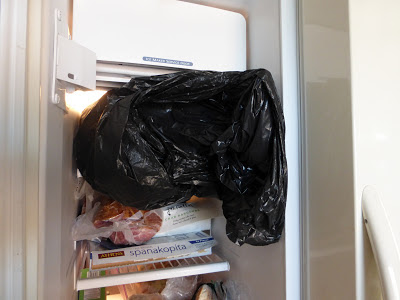 Jerry has his own fish commercially canned and I love the canned jalapeño albacore tuna (a small slice of jalapeño adds a nice zing).  I think, no, I know, I can probably can my own fish.  I haven't made the commitment yet but I believe I've narrowed it down to a 23-quart pressure cooker/canner. It'll probably happen asap when we realize everything in the freezer tastes and smells like fish.