The Scent of Spring

There was a fragrance in the air we couldn't identify.  The Man and I noticed it as soon as we walked outside.  It smelled of blossoms, and yet, we didn't have any flowering plants nearby.  We were wrong.  Overnight, the neighboring fields had been newly carpeted in purple and blue. 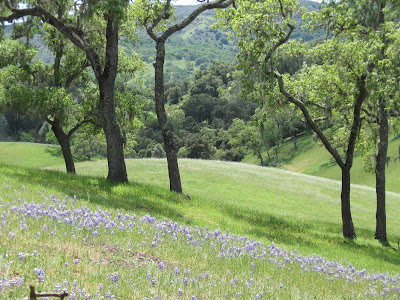 And while we were admiring the flowers that appeared out of nowhere The Man noticed another newcomer under a shady oak.


A few hours after spotting the baby goat we went back to check on it and saw that it was gone from it's spot.  In the distance we could see the herd had moved away to a nearby hill.  Mele, on the other hand, was focused on something closer to us.

The Man climbed over the barbed wire fence and found the kid entirely hidden between the fence and an oak stump.  It seemed too small to be by itself.  The Man carried the baby back to it's Mama on the hill.  She sniffed the little one then they both walked off together.