Will the Egg-Layer Please Stand Up?

One of the hens has been laying an egg a day since August 27.  We have seven tiny tan-colored eggs with a total weight of 8.7 ounces (an extra large commercial egg weighs 2.1 ounces).  No egg yesterday or at least we haven't found it yet.

Only problem is we don't know who's the layer.  I was convinced it was one of the Speckled because, well, they're big and plump and always the last ones out of the nesting box.  Circumstantial?  Probably.

Sunday, The Man found a Red sitting on a warm egg.  She with the littlest body and the biggest, brightest red comb and wattle.  We were getting suspicious that "she" was really a "he".  Hope it's her eggs and glad we didn't put her in the fryer.  (Just kidding.) 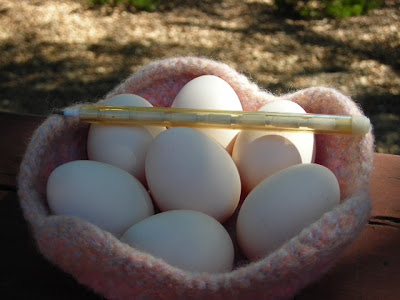