As the days (weeks, months) lumbers along it's hard to keep track of the passage of time. It seems like the definition of time seems to have gotten all wonky and weird. That said, I can account for the last twenty days of my life. Twenty days of caring for Sophia.

Yes, Sophia, the chicken. Remember her and her wily ways?

At the beginning of the month I noticed raw egg on the floor of the coop. I mentioned to The Man that someone laid an egg without a shell. The next day Sophia pooped out the egg-like mess and then I noticed her hunchy posture, she didn't look well.

I asked The Man to set up the large wire kennel, a.k.a. the Chicken Hospital. I suspected that Sophia was egg bound and I started her treatment right away. First, I spoon-fed her Calcium (crushed Tums dissolved in water),  then I placed her in a warm water bath. It's supposed to help her relax and make it easier to pass the egg. I also checked her externally and internally for a stuck egg. She fell asleep. 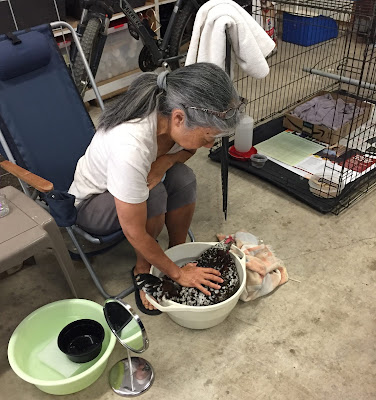 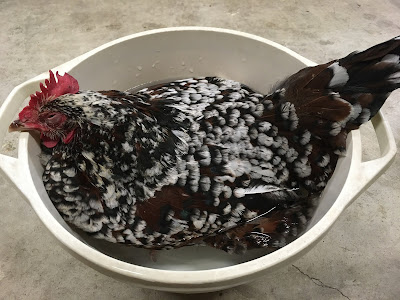 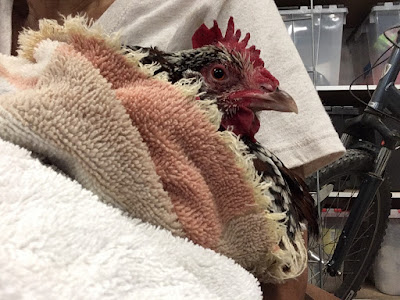 The treatment plan changed after a few days of baths when I found a broken egg shell on her vent. Google Vet led me to suspect Egg Peritonitis (egg yolk in the abdominal cavity) as Sophia continued with her frequent watery "cooked egg" poops. I gave her a four-day course of injected Penicillin and changed her treatment plan to supportive. 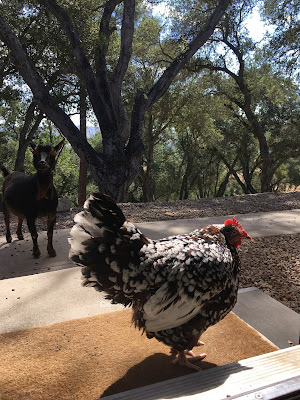 She didn't eat her Layer pellets but she willingly took liquids as I fed her Pedialyte, Tums, beef broth (chicken broth seemed wrong), and chilled water. She swallowed whole grapes and pecked at the wild birds' seed. Her appetite waxed and waned as she sampled bits of apple, cabbage, cantaloupe, carrots, celery, corn on the cob, deli meat, dry cat food, kale, lettuce, plums, probiotic paste, sunflower seeds, and yogurt. I kept an eye on her comb to monitor her fluid balance, it seemed thinner but not floppy. 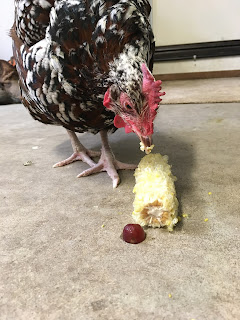 I was surprised that The Man was supportive of my efforts. He said, "She's your pet, do whatever it takes," as I fed Sophia another bite of Black Forest Ham.

After a few days of confinement in the garage I let her out after liquids and breakfast. In the late afternoon I brought her back into the garage. When it got dark she put herself to bed in the Chicken Hospital. 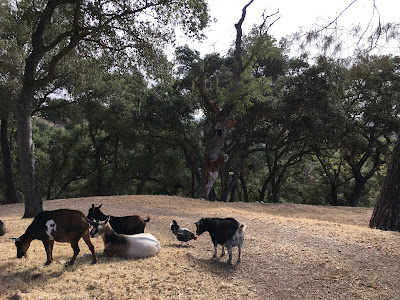 I could tell she was getting better by her poops and remember nothing makes nurses happier than healthy bowel movements. (July 3 top left, July 23 bottom right.) Sophia has been back in the coop since Sunday. Her appetite has returned with gusto as she makes up for lost time. 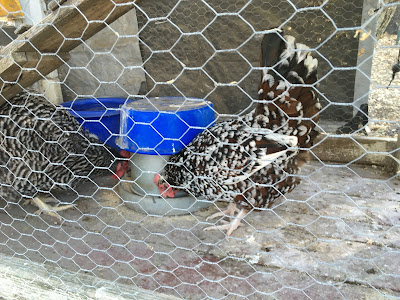 This morning she flew up and took the seat next to me as I sat on the bench.

I'm not sure how long she'll be well she is eight years old after all. Yet this time I don't think she was ready to give up. Not without a good fight. 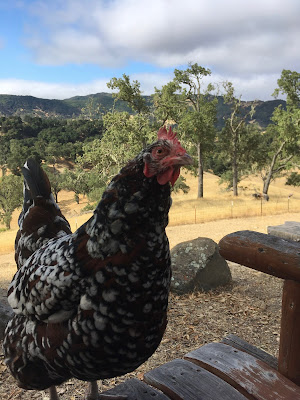 In memoriam to Ethel - Sandee's white chicken - she was a good girl. 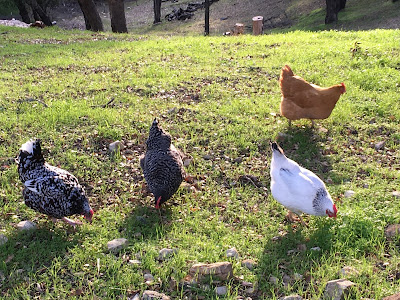