Total Eclipse. Totally cool. Sure, we should go. That was our thoughts at the end of July.

Sure, The Man and Z. were taking the travel trailer to the Bonneville Salt Flats in Nevada for Speed Week and would be gone for a week. But, hey, they'd be home five days prior to the Eclipse leaving plenty of time to clean the RV, refuel, repack, and drive to eastern Oregon.

Sure, the truck was scheduled to get new robust tires three days prior to the Eclipse leaving us only two traveling days, but, hey, sleep is over-rated anyway.

Sure, I wasn't able to find any souvenir commemorative solar eclipse glasses in time for the viewing but, hey, The Man had welding helmets with the approved filters. Still good to go.

No problem, except for, you know, the "million" people predicted to show up and we would all be driving along the same roads. We scuttled our plans when we read that every field, every inch of ground, in the small towns of eastern Oregon were being turned into camping and parking spots. Good luck finding a campsite in the National Forest.

So instead we headed to the western slope of the Sierra Nevada mountains and found an empty patch of ground in an empty forest all to ourselves to watch the (perfectly okay) partial eclipse. 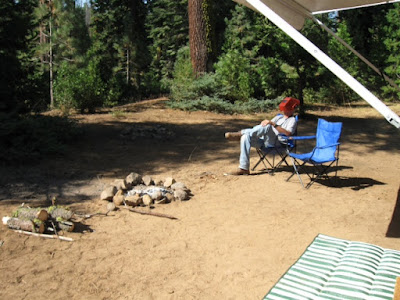 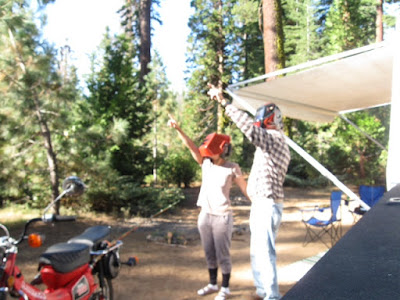 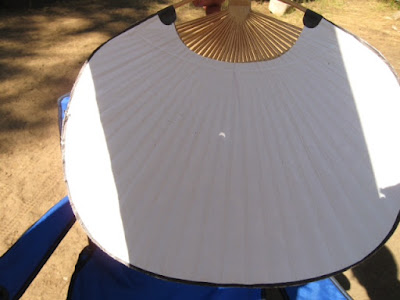 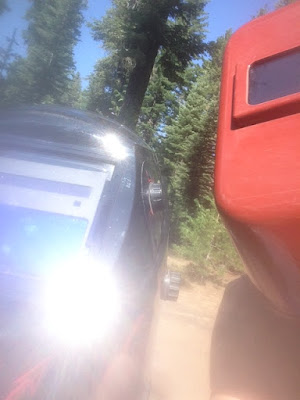 When the eclipse was over, it was a short walk (or ride) to Herring Creek for a little fishing. 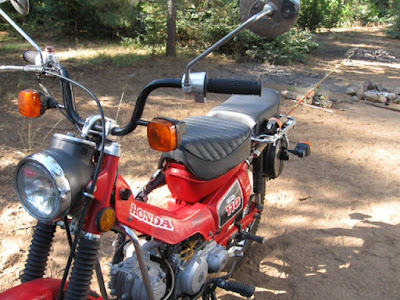 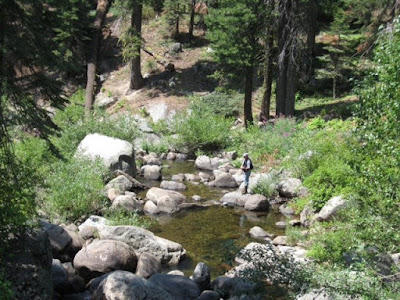 A much quicker return trip back to camp when the rain, thunder, and lightning started. 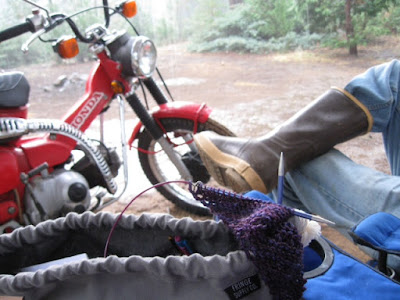 That night it was too soggy for a camp fire so for dinner I coated the freshly caught fish with yogurt, rolled it in crushed TJ's Salt & Pepper Potato Chips, and pan-fried it. To make it a one pot meal, I added - Spanish rice, kernels of sweet corn, and chopped artichoke hearts - items I had precooked at home. I briefly thought a picture would've been nice but we were already scraping the crusty chips and bits from the bottom of the pan.

The next day we packed up in search of other campgrounds and trout streams. 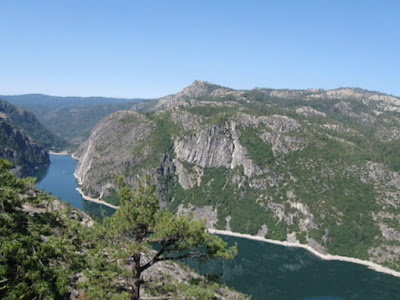 Wildfire off in the distance 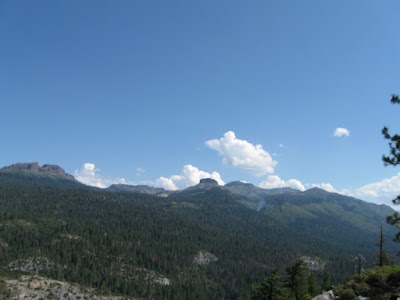 Fence Creek Campground and our campsite 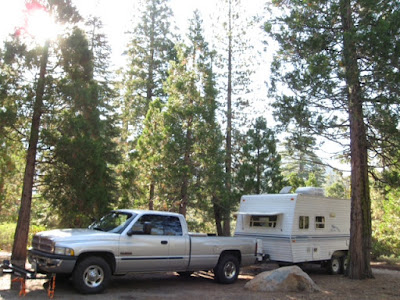 When we first got to Fence Creek CG we noticed just one other occupied campsite with a tent and in another section of the campground a group of National Forest Service firefighters with their numerous tents. There was only one NFS guy, all alone, watching over the empty tents and gear. It turns out that the wildfire smoke we saw from Donnell Lake was just a few miles away from the campground and the firefighters were there monitoring and controlling the burn.

The next day the tent campers were gone. It was very quiet and it felt like we had the entire area to ourselves. Our one night turned into three nights and each day we paid an additional $8 camping fee.

While The Man headed out on the Honda trail bike to fish for our dinner I stayed back at camp and taught myself how to spin yarn with a Louet Drop Spindle, wool fiber, and Abby Franquemont's Respect the Spindle book. Before we left home I had read most of the book and watched a few of Abby's video tutorials on YouTube. 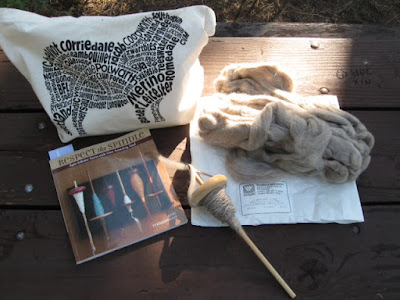 The Louet spindle is considered to be a Beginner's spindle, at almost 3 ounces, it's heavy, and heavy-duty. It held up well to my clumsy attempts and survived the hard whacks against the picnic table, the multiple drops, and flying out of my hands and into the nearby bushes. 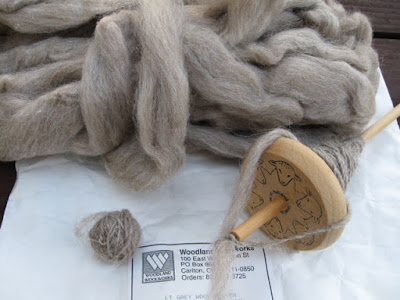 By the third day I was making thick and thin yarn (while striving for consistency) and quite pleased with myself. It was getting easier and easier to keep the spindle aloft and spinning like a top, tethered by spun yarn. 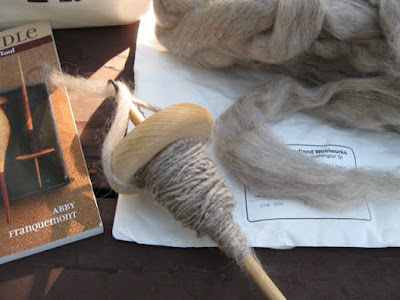 In between my crash course in spindling yarn we unhitched the Travel Trailer from the truck and headed higher in the mountains up towards Sonora Pass. This road prohibited long vehicles, RV's, and trailers (read: very narrow, very twisty road). 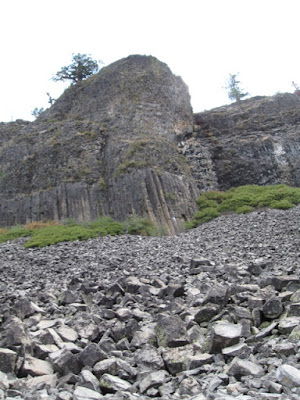 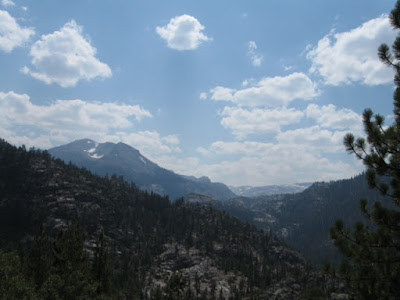 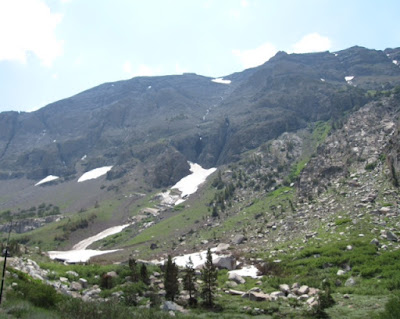 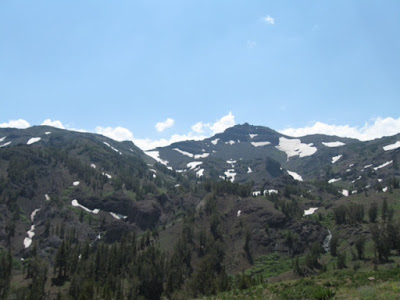 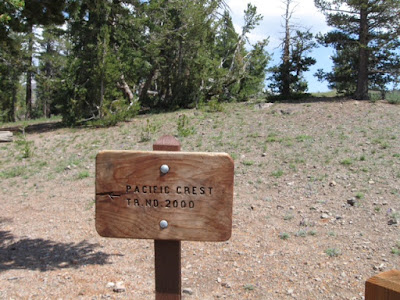 (In case you were wondering why there's a tiny motorcycle mounted to the front of The Man's truck, well, that's a whole 'nother story....) 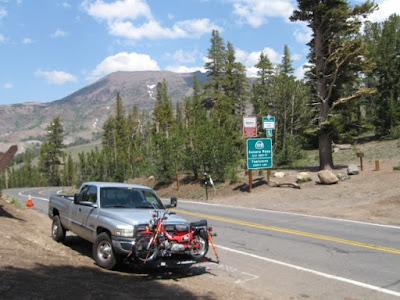 And then on the way back to camp, more fishing (and spindling), and that night freshly caught fish cooked over the campfire. Here's a tip: You really shouldn't eat more than two four toasted marshmallows. 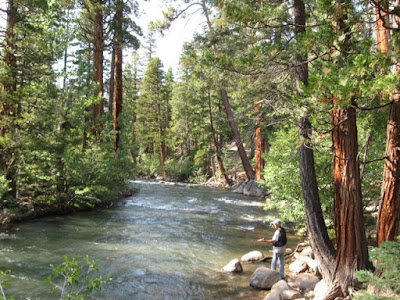 The next morning, Friday, I thought it would be a good idea to find another campsite for our last night. We'd spent three nights at Fence Creek CG, all alone except for the NFS Firefighters (who were so tired after a long day we never heard a peep from them when they came back to camp), beautiful fishing streams with hardly anyone around, freshly caught trout for dinner, cool sunny weather. Let's leave.

It made perfect sense to me to leave our campsite and head down to the area around Bass Lake and Yosemite. On a Friday. During the summer. Peak tourist season. The trek did not end well.

Okay. So. Here's my side of the story: I didn't know that The Man researches all the campsites in the area before we head out the door. I thought it was like the good ol' days of traveling in our VW camper bus and we traveled wily-nily in that we head off in one direction and then after awhile we stop and camp. I didn't know there was a Plan.

The Man did not enjoy pulling the travel trailer on the curvy narrow roads to Oakhurst ("California's gateway to Yosemite"). We drove through the area transformed by the Detwiler Fire in July. It was scorched earth for as far as we could see. 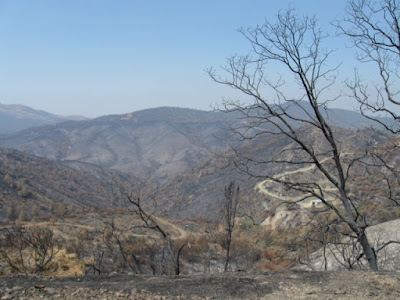 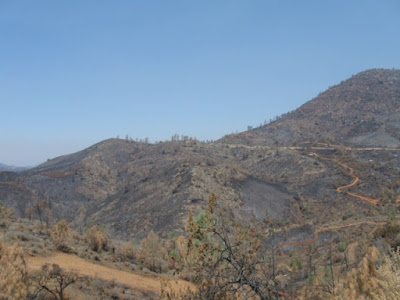 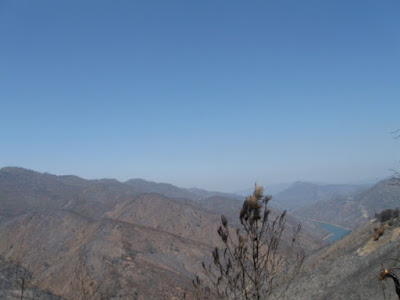 Needless to say the town of Oakhurst was jammed-packed with people and cars. We huddled in a back parking lot near the library and came up empty for anywhere to go. We headed home. The drive home was not enjoyable, let's just say it was a bit frosty.

Good news: I'm sure we'll go camping again. That is, when The Man comes home from his solo camping trip. 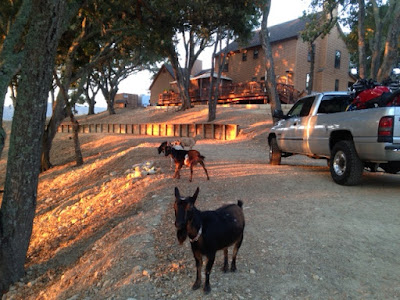 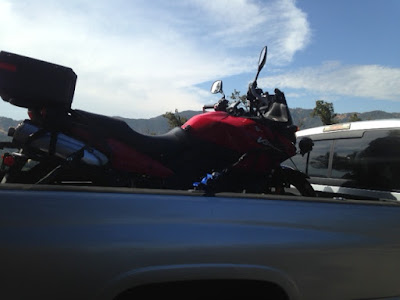