Serendipity: an aptitude for making desirable discoveries by accident.

Last week The Man and I drove south to the Santa Barbara Museum of Natural History. We went to see a special exhibit called, A T. Rex Named Sue. We had watched the documentary, Dinosaur 13, and learned that Sue was an extremely well-preserved, nearly complete, 67-million-year-old fossil, and her discovery prompted an intense legal battle over her ownership. 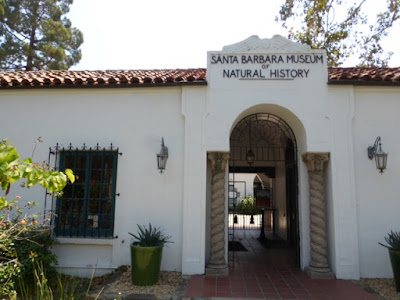 Okay, silly me, I thought I was going to see the actual Sue, the 8.4 billion dollar dinosaur, instead of "Traveling Sue", an exact replica. Only after looking at all the exhibits, did I go up to The Man and ask, "Is this the real dinosaur?" Yep, kinda slow sometimes. A few minutes later I overheard a kid, a little kid,  say, " . . . and some people thought they'd bring the real Sue here . . . . " (He was not looking my way.) 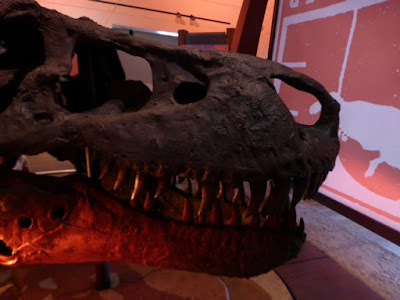 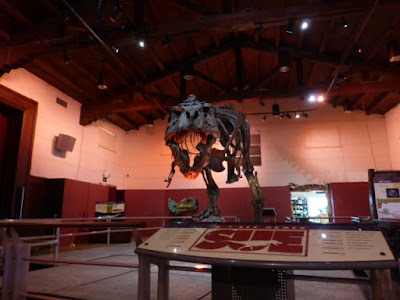 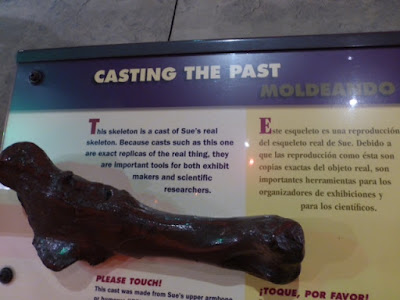 I was disappointed about Sue not being "real" but enjoyed the permanent exhibits and the bygone-days-dioramas from the '50's. The docents were kind and listened patiently to our stories of close encounters with wild things as we looked at the stuffed displays of mountain lions, raccoons, bobcats, skunk and other critters. 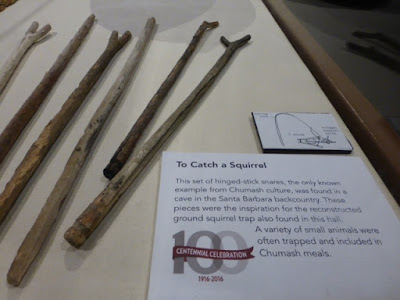 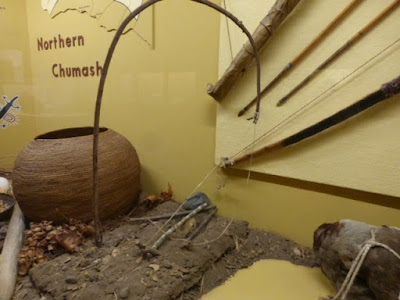 We crossed paths with Frank Hein, the Director of Exhibits, on our way to the Butterfly Pavilion. We asked him about the replica and he enthusiastically told us about the exhibit: There's two Traveling Sues on tour, it took 7 people to set her up - directed by someone from the Field Museum in Chicago (where the real Sue lives), the display has been to Boston and Hawaii - then he took out his iPhone and showed us the pictures of them setting up the display and how the skeleton is perfectly balanced. Sue and the displays arrived in 3 big semi rigs which must've been a feat in itself. Even The Man's Dodge Ram truck seemed too big as he maneuvered through the older narrow residential area near the Museum.

Okay, now I'm impressed by the effort taken to present A T. Rex named Sue exhibit and glad we made the day trip to Santa Barbara.

As I wrote this post I remembered Bishop Museum on Oahu had a dinosaur display while we lived there so I googled and found a Honolulu Star-Bulletin article dated Saturday, July 15, 2000. The first line read "You'd have to be extinct not to have heard about Hawaii's newest and biggest star, a 45-foot dinosaur named Sue." I thought it was amazing that Hawaii received Traveling Sue in July, the Field Museum Sue exhibit had just opened two months earlier in May. (The Dinosaur 13 documentary premiered in 2014.)

This is funny, the article also stated, "Sue, wearing two dinosaur-size orchid leis for the occasion, was illuminated by dozens of flashbulbs and home video camera lights." Remember, this was in the year 2000, a time before cellphones with built-in cameras.

I continued to read, " . . . it took 2 years to bring Sue to Hawaii. Richard Duggan, who was in charge of assembling Sue, and McDonald's of Hawaii were instrumental in lobbying to get Sue to Hawaii; the other traveling exhibit opened in Boston last month. Duggan worked at Chicago's Field Museum for several years before transferring to Hawaii."

He was our neighbor in Kaneohe. Yep, no kidding. His wife Susan was our librarian at the Kaneohe branch till she transferred to town but we saw them both several times a week since they lived at the end of the street and had to pass by our house. Susan loved the idea that The Man remodeled our home by borrowing library books. She could follow our home improvement progress by the books we checked out.

Serendipity, a happy accident, a happy coincidence? I often tell The Man my spirits and guides are talking to me and I listen.

SLO Yarns blog is approaching it's fourth birthday. If it wasn't for a technical glitch I could have said I've posted an entry every single week for four years. Okay, truthfully, it was user error not a glitch - I had an entry queued up to automatically post July 1st while we were on the road to Colorado but didn't press the "done" button so the entry didn't get posted automatically like I assumed it would.

About every other month or so I think about giving the blog up. This thought usually crosses my mind on a beautiful Sunday or Saturday morning (like today) when The Man waves to me as he hops on his KLR motorcycle for a Central Coast back roads ride.

Fortunately, it's only a fleeting thought. I turn back to my MacBook, sip my coffee, and find my words: I love the words.