Out And About: Self-Contained and Flexible

Last week, early Wednesday morning, The Man and I headed east for a meetup with The Man's family in Steamboat Springs, Colorado. We planned to arrive Saturday, July 2nd, allowing ourselves 3 days to drive the 1200 miles to Steamboat.

Back in the day, traveling this route in our 1977 VW Camper bus (with pop-up top), would have probably taken over 2 weeks and that's just traveling one-way.

This time around we were allowing ourselves 3 days to get there and 2 days to get home so The Man planned a route along Interstate Highway I-80 rather than the back roads we usually like to take.

The Man's motto as we planned our trip was to be "self-contained and flexible". I could be self-contained but the flexible part made me squirm. After awhile I kept quiet about it, besides The Man wasn't listening as he concentrated on his driving. The Man's planning did include confirmed campground reservations for the 3 nights in Colorado, the rest of the time we'd be winging it, finding places to camp en route.

Unfortunately we didn't really have enough time to do much sightseeing but The Man had jiggled our route to include visits to Camping World (Sacramento, CA), Cabela's (Reno, NV), the Bonneville Speedway (Bonneville Salt Flats, UT), and Sportsman's Warehouse (Vernal, UT). Get the gist?

While The Man refueled his diesel truck near Camping World, Jimmy Lee - a spry Korean War vet - came over to talk to him about Dodge Ram diesel trucks, he owned one as well. He gave us directions to a Bass Pro Shop we could see in the distance. Bonus stop, it wasn't on The Man's list. 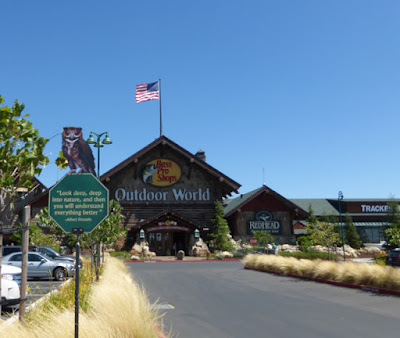 My list was smaller: Chicken fried steak dinner at a truck stop and $9.99 $8.99 Prime Rib dinner in Las Vegas. Sadly, I did not get either meals but I did get my fill of biscuits and gravy for breakfast - twice. 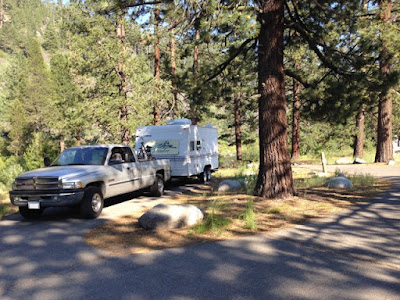 After we set up camp The Man left to fish the Truckee River. Shortly thereafter a white truck pulled up to our campsite and the driver hollered something while I was sitting at the picnic table knitting.

He showed me three trout - already cleaned - that he caught at his "secret spot". We shared a chuckle when I told him that The Man was sure going to be surprised upon his return to camp. Another truck pulled up behind him and he went over to offer them a fish.

The campground host, Brandy, stopped by on her evening rounds and warned me of a big Mama Bear with her cubs that had been frequenting the campground. She held up her bear deterrent, a large air horn canister, and said they had not made an appearance in the last four days. She quickly sped away in her golf cart after the white truck when I told her I just got a fresh trout from the nice man that had just driven by.

A couple of hours later The Man came back (empty-handed) and couldn't believe his eyes when he saw my fish. He started a fire and I prepped the trout and sliced new red potatoes, both wrapped in foil, to be cooked over the hot coals. 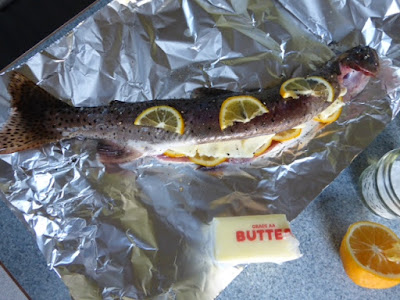 The next morning The Man came upon a messy campsite. Empty food containers strewn about the truck and a nearby tent. I guess they didn't heed the posted signs warning of bears in the area and to bear-proof their food. The chocolate pudding cups were licked clean. 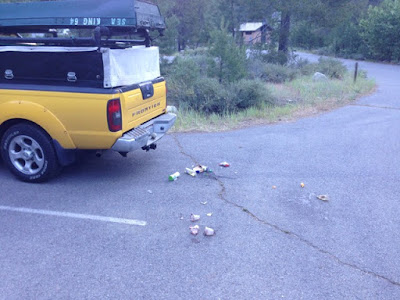 Not too long after leaving the campground we crossed into Nevada. We stopped at the Boomtown Casino for breakfast (Mel's Diner - biscuits and gravy for me), just a few blocks away from Cabela's. The Man commented on how depressing a casino was in the morning as I dug into my wallet for quarters. Yes, it was sad, I couldn't find any change. 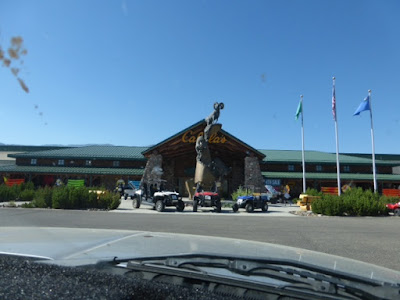 Cabela's opened their door at 9 am, we walked in at 9:10. While The Man filled a shopping wagon I checked out the stuffed animals on display (Arctic Musk Ox fiber = qiviut yarn). 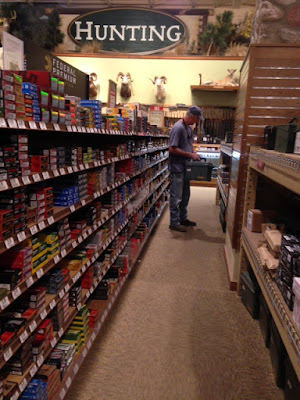 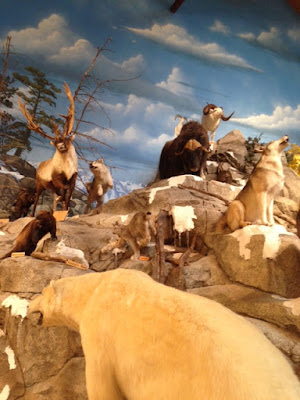 Eventually we left Cabela's and drove through the Nevada desert, it was hot, we didn't linger.

South of Wells, NV, about an hour from the Utah state line we climbed up into the Ruby Mountains, lured by the snow-covered peaks, we found an Aspen shaded spot at Angel Creek CG (elev 6200 ft) in the Humboldt-Toiyabe National Forest. 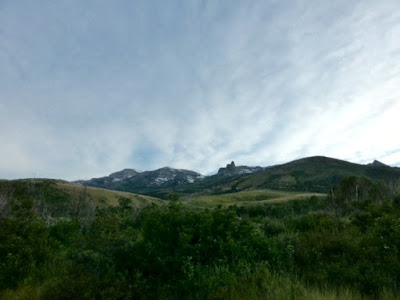 Our camp hosts, Grover and Diane, broke into smiles and entertained us with stories of their life once they realized we didn't need anything from them except change to pay our campsite fee. Grover was still talking as we said our good nights and left their campsite in the dark.

The next morning, Friday, we crossed over into Utah and about an hour later we were at the Bonneville Salt Flats International Speedway, mecca for Speedsters. We chatted with two couples from Europe. They had picked up three rental motorcycles (two Indians and one Harley) from Las Vegas, then they headed to either South or North Dakota we're not sure which one and no one actually mentioned Sturgis....  Now they were heading to San Francisco to drop off the bikes and fly home.

They kindly offered to take our picture and gave us an option . . . The Man chose the Indian. 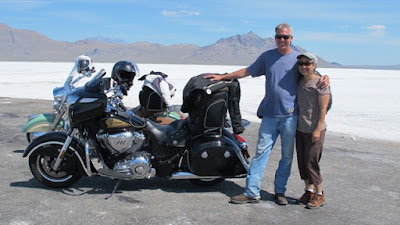 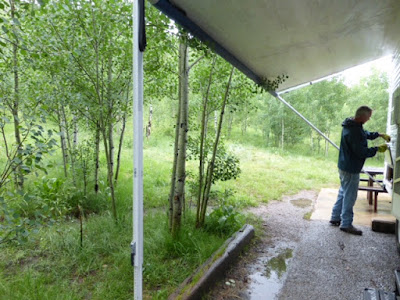 It had started to rain and (initially) we were happy to get one of the last campsites available. Once the rain stopped the campers came outside and the revelry started up again. The campground was packed for the 3-day Holiday weekend with dogs, kids, people, and cars. We weren't the only ones that were daunted by the rowdy campers, our camp hosts told us they were calling it quits and leaving in the morning to "just go camping".

We left the Campground at 6:30 am and arrived at Sportsman's Warehouse. We watched them unlock the doors and The Man walked in at 9:07 am. I was trying on hiking shoes when The Man came by pushing a loaded cart and told me we had to get back on the road soon.

We drove through the town of Vernal, UT and we pledged to return. One of these days I'd like to visit Dinosaur National Monument from the Utah side with a side trip to Sportsman's Warehouse, of course. 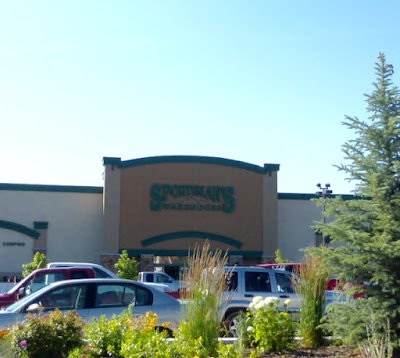 We crossed into Colorado less than 40 minutes after leaving Vernal, UT.

We made it: Colorado or Bust.

Next stop, Roundups and Rodeos.