The days are getting noticeably shorter: It's twilight before 7 pm. We gather up our animals and secure them before full darkness. Fall is in the air with cool days and cooler nights. Well, for a few days anyway, then the temperature heats up again . . . summer's last fling.

The spring babies have gotten bigger over the summer and we are pleased to see Mama Deer and her twins foraging around the neighborhood. We see the family frequently on our neighbor's property, a favorite shady spot, alongside our driveway. 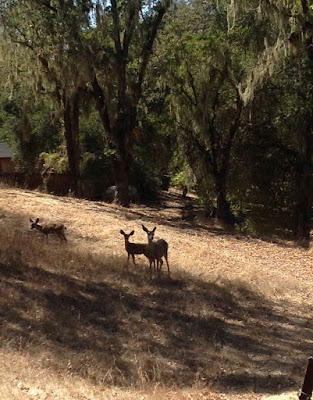 I wonder about the many dangers the twins have faced in their still brief lives. Their first meeting with Mattie occurred in June. The next month we witnessed a second too close encounter.

It was dusk, our usual time to herd the Goaty Boys down the driveway and then up Bird Lane to their pen. The Man and I had stopped to watch the cows that were grazing close to our fence line. In the distance I could hear the cries of a bird: Calling. Calling. Calling. I turned around and saw that the animals were not following us. They were all - five heads turned - staring intently to the area below the Vista.

I told The Man that something was happening and walked briskly back up to where the dogs and goats stood. It took a few seconds for my eyes to adjust to the waning light, and then it took another few seconds to realize what I was seeing. It was not the cries of a bird that I had heard.

A coyote was chasing a screaming fawn. Wait, there were two fawns. And, yes, Mama Deer as well. All four animals were running in crazy circles in the meadow below.


The Man ran back to the house to get his varmint deterrent (aka .223) while I clapped my hands to distract the coyote.

Here's the thing about coyotes - they're very curious creatures. Luckily, I knew that about them.

Desperate times calls for desperate measures. I stuck two fingers from each hand into my mouth and BLEW. Yes, the same fingers that had patted the heads of dogs, goats, chickens, and one cat. Earthy, dirty, (shudder) unsanitized fingers were in my mouth. A true act of heroism.

My four-fingered whistle stopped the coyote dead in his tracks. He stood perfectly still and looked up at me. I'm guessing his curious stare turned to "stink eye" as Mama Deer and her twins made their quick get away through the oak-studded hilly terrain.

The drama was over by the time The Man returned. I pointed out the coyote loping along the game trail but after a moment he quickly disappeared in the trees.

Before we continued our evening walk down the driveway again, I detoured to the pen and secured the chickens in their coop. You know, just in case Mr. Coyote wanted to substitute chicken for his dinner since venison was no longer on the menu. 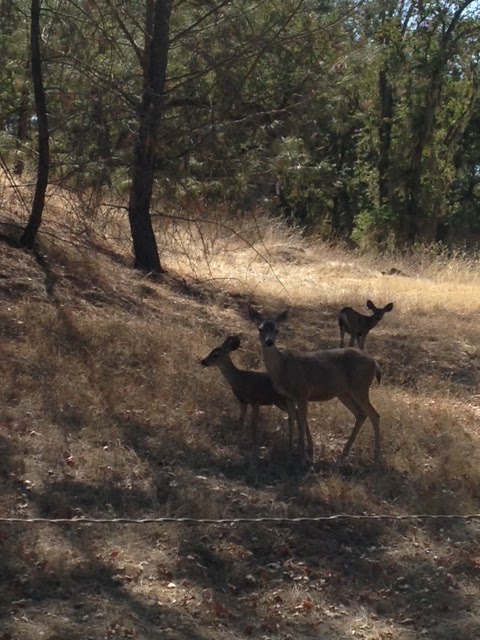