The Summer Series continues whereby I recap an earlier story ~

The Man left first thing in the morning with his truck along with his V-Strom motorcycle in the bed of the truck. It would take him 6 hours to drive north to his starting point in Redding, California. He had reservations for one night at the Ramada Inn. The hotel welcomed him to park his truck for the entire week he'd be wilderness tent camping on the motorcycle. 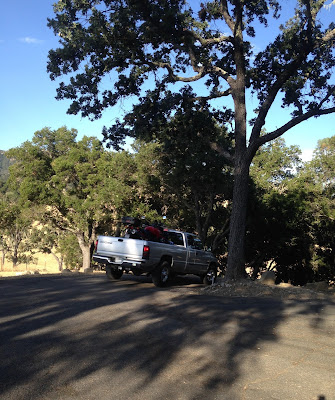 No word from The Man.

In the afternoon The Man called from a City Park in the small town of Etna, CA. I asked him about his stay at the Redding Ramada. I was curious how things went unloading the heavy motorcycle off the back of his truck. He said he had gotten up early in the morning because he needed to park the truck a little bit on the grassy lawn to make unloading the motorcycle easier. He was hoping no one would see him parked on the lawn. Just as he was getting the bike ramps out of the truck the sprinklers came on. The water went every which way. It sprayed him, the bike, the truck, the road, everywhere. He had to wait for the sprinklers to turn off before he could continue to unload the motorcycle. He saw the Harley-Davidson bikers watching him from their hotel window. The Man said it went smoothly.

He asked me what I was up to and I probably talked about the weather, the animals, and my latest knitting projects, "blah, blah, blah". When I was done he told me about his night.

Monday night he camped at Big Flat Campground off Coffee Creek Road not too far from the Pacific Crest Trail.

Around 11 pm he was awakened by a black bear trying to get into his metal motorcycle pannier cases sitting on the ground. It's where he keeps his food. Although it was 30 feet away from his tent it was still too close for comfort. He shined the flashlight on the bear and started to "TSCH, TSCH", like, you know, the Dog Whisperer. Maybe he should've said "Shoo, Shoo" because the bear did not like "TSCH".  It turned to The Man "it's eyes as big as yellow tennis balls" and started to shake his head side to side and paw at the ground. "It looked like it was getting ready to charge." He had his bear deterrent in hand and when the bear heard the metallic click it turned and walked away from The Man but continued to roam around the campground through the night.

The Man did not sleep for the rest of the night.

The next day he talked about his experience to a few of the campers and hikers he met and learned that it might have been the resident bear making it's rounds. Another person later told him that bears that have a history of being a "problem" in more populated campgrounds around the state are brought to the area where The Man was camping.

One woman hiker mentioned a Ranger told her to keep her food in the tent with her so the bear would smell her human scent and leave the food alone. The Man diplomatically told her she should probably check with someone else. I said, "That's crazy!"

He said she was from Australia.

"Oh, well, that makes sense", I said. "She's from Australia, Down Under, they've got everything backwards." We laughed, but we also hope she starts hanging her food in a not-too-near-to-her tree.

The Man ended our call after that, he was going to visit Etna Hardware & Sporting Goods to see if they had a small air horn in stock. "It's supposed to scare bears away", he said. I was looking at the town map via Google Maps while I talked to him and told him he needed to drive down Diggles Street to Pig Alley to get to the Hardware Store. I sent a picture of the map in case he didn't believe me. 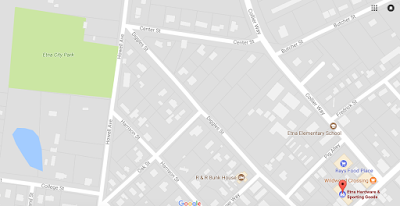