So there I was, minding my own business and Civic Duty came knocking on my door. It came in the form of a Jury Summons. I was scheduled to appear just before my requested time off for the Thanksgiving Holiday, but hey, what the heck. I'll just be required to make a telephone call a few times, they'll release me from service, and we'll call it good for another few years. Right?

I was instructed to make an appearance at the Paso Robles Courthouse. This did not bode well for me. Over the years I've had to appear only two times but both times I was selected to be an Alternate Juror.

The twelve Jurors had been selected the week before and had pretty much exhausted their own jury pool. The judge brought in our group the following week as fresh meat prospects. Three Alternate Jurors were to be selected; the trial was to last about two weeks.

The high point of that day was when I noticed the shackles under my chair. Ooh, shiny. 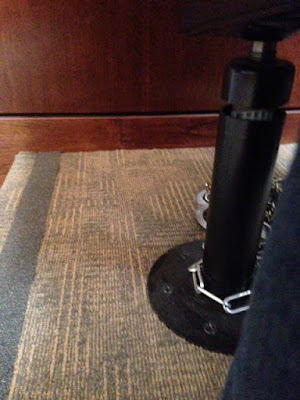 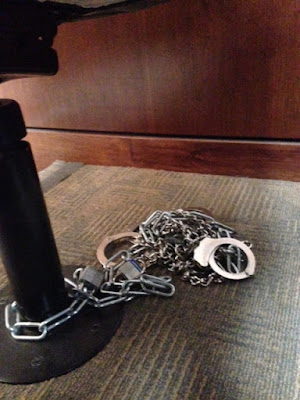 FAQs - Superior Court, SLO: Weapons of any type will not be permitted into any court facility. Items such as: knives (including pocket knives), guns, stun guns, pepper spray, mace, scissors, knitting needles, corkscrews, or any item that may be used as a weapon are not permitted. 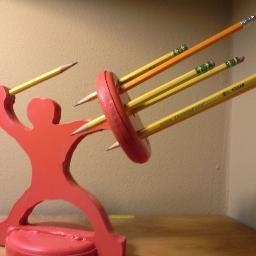 I asked the Security Officer about the knitting needle rule and he offered to take a look at my knitting needles if I brought them in. That night I went through my collection and even asked The Man for his opinion. The Man suggested the big fat wooden bambucha needles, as they look the least shiv-like out of the bunch. Luckily they're US 17, the same size I use for knitting Comfort Scarves.

The next morning Officer Darrel gave me the go-ahead to bring my knitting into the Courthouse. Civic Duty and Charity Knitting, talk about racking up those karma points. 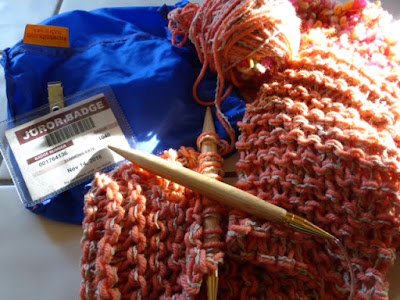 It was truly amazing to have a group of complete strangers be so compatible, generous, kind, and respectful of one another. Over the span of three weeks, during our very frequent breaks, the fifteen of us shared life stories, recipes, restaurant recommendations, tasty treats, and Crock Pots.

Cindy brought me her spare Crock Pot when I mentioned I had cracked my Slow Cooker's ceramic liner. 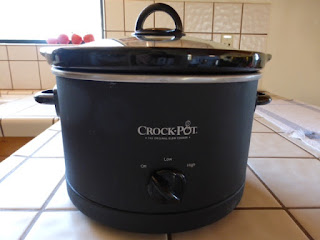 The beginning of the fourth week of the trial found me at home on standby. In the late afternoon I received a call from the Court Clerk and was released and thanked for fulfilling my Civic Duty. Although I had heard the whole trial I was not needed during jury deliberation and was grateful for that. I was surprised when Madam Clerk asked if I wanted to know the Jury's decision.

If we are ever to be judged, we should all be so lucky to be judged by my fellow Jurors. Oh, and if you get summoned before a Holiday, you might want to defer till another time.