Daylight Savings Time. Spring forward, fall back - so strange and perplexing - the very concept eludes me. In Hawaii, time is constant; we don't fiddle with our clocks nilly-willy.

Last Saturday, Halloween, before going to bed we changed our clocks. Before the fated day I plied The Man with scenario questions, "So, it's 6 pm now, what time is it going to be next Sunday? Is it going to be daytime or night-time?" (After a few days The Man stopped sitting next to me in the early evenings.)

Anyway, the problem was the goats were still being housed in the garage during the night. Zeke had been sleeping in the garage since his brothers were killed in August.

It's still hard to believe - even to us - but we were able to train Zeke and Bitsy to "go pee" before they bedded down in the garage and remain house-broken through the night. Sure there was the occasional accident, most often because we had over-slept and didn't let them out in time. We found out that goats are only house-broken for 11.45 hours, after that grab the paper towels.

Baby Jack, was still being potty-trained, and kept separate in a wire crate with a - usually dry - XL absorbent puppy pee pad. The crate also gave him a break from Goaty (pecking order) training. As the newest and littlest goat he was getting the brunt of the "pecks".

So, here's the thing: The goats get locked up by nightfall and with the time change it would be dark by 5:30 pm. Neither The Man nor I was going to get out of bed at 5 am to let the goats out of the garage.

It was time to move the goats back to the pen.

Remember, The Man had installed a heavy-duty metal and wire gate to keep the goats enclosed in the goat house at night. The Man's monitoring of the game camera has turned up no (none, zero, zilch) mountain lion sightings. 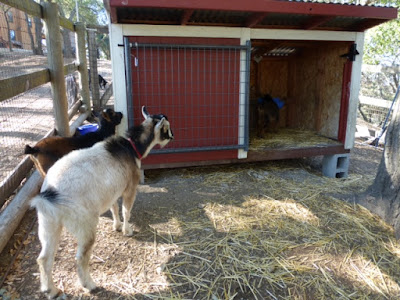 Last Friday, we brought the big pet carrier down to the pen. It was the heavy-duty dog carrier we used to transport Mele from Hawaii to California. It still had the Live Animal labels taped on, well, till Bitsy tried to eat them. For Jack, the crate provided a head-butting-and-baby-battering-free zone. He could sleep in peace, comfort, and safety. Bitsy, smart girl, promptly jumped on top of the crate and claimed the higher spot for herself. 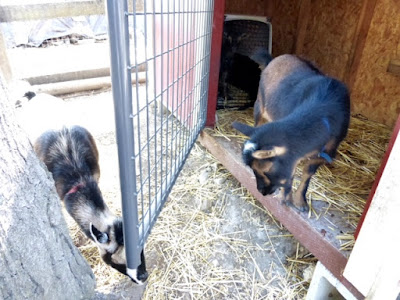 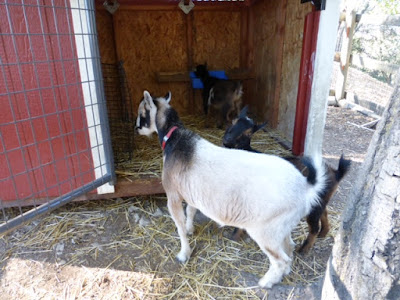 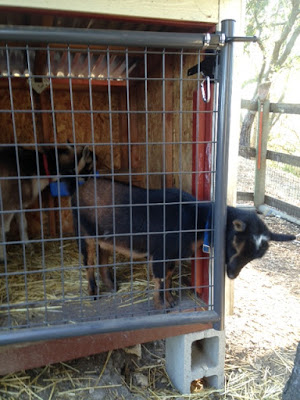